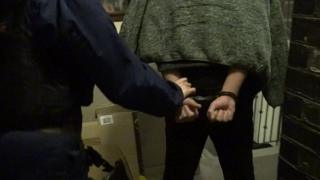 More than 40 people have been arrested in a crackdown on courier fraud across England and Wales.

Police say more than 3,000 people, most of them elderly, have been duped into withdrawing large sums of cash and handing it to someone posing as a courier or police officer.

In October, a couple from Dorset lost almost £1m, including their pensions and all their savings.

“This is a despicable crime,” said Cdr Karen Baxter of City of London Police.

The Dorset couple were left with just £187 after the fraudsters went back time and again.

They are typical victims of courier fraud, according to Cdr Baxter.

“Fraudsters specifically target older people by exploiting their trust in the police and their bank, to bleed them dry,” she said.

The fraudsters call victims on the phone, pretending to be a police officer or bank official, and persuade them to hand over money to a “courier” on the pretext of assisting an investigation into corruption.

“Courier fraudsters are nearly always part of broader criminal gangs: they are persuasive and can be aggressive.

“This can be particularly intimidating when they turn up on a victim’s doorstep,” said Cdr Baxter.

Police used dogs to help recover some of the valuables

Overall, police say there have been 3,188 victims in two years with a steep rise in the past six months.

The losses reported to police total more than £12m.

The raids, led by City of London Police and nine other forces including Kent Police, West Mercia Police, Hertfordshire Police and Dorset Police, began in November and were stepped up in January.

So far there have been:

Additionally, one offender has been returned to prison, where he was already serving time for courier fraud, after absconding last April.

Police wait in the street before a raid

In a bid to raise awareness, fraud prevention experts advise people to end cold calls and seek advice from trusted friends or family members or to call their banks directly using the number on their bank cards.

They say police and banks will never ask for full passwords and pin numbers or ask for money to be handed or transferred to them.

Cdr Baxter promised fraudsters their activities would not be tolerated, adding: “We will disrupt your activity, prevent you targeting victims, bring you before the courts and ultimately send you to prison.”