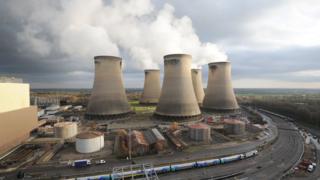 Four new gas-fired turbines at Drax power station have been approved by the UK government – against a ruling from its Planning Inspectorate.

The turbines are to replace coal-fired units, but the inspectorate said they should be blocked because of their impact on climate change.

Environmentalists argued that emissions from the turbines would contribute to breaching climate targets.

But the government said fossil fuel generation will still be needed.

It said the planning system shouldn’t make decisions on the issue.

Environmentalists say the announcement suggests the government is not serious in its pledge to become a zero carbon economy.

The original decision from the inspectorate took into account climate change concerns for the first time.

It heard that the new gas plant would produce as much as 75% of all the emissions projected for the electricity sector.

The inspectors concluded this would undermine UK climate policies. They also noted that several other gas generation projects had been approved already.

But in a letter, Andrea Leadsom, Secretary for Business, Energy and Industrial Strategy, said the other projects might not go ahead.

She said she took into account energy security and affordability, as well as carbon emissions.

Some fossil fuels would be needed, especially to balance out intermittent power from renewables, she said. The secretary also noted that Drax would have substantial battery storage.

And the new gas plant would be engineered to allow carbon capture equipment to be fitted in the future.

Environmentalists point out that carbon capture technology has been available for decades, but barely used.

The green legal group ClientEarth said the approval of Drax would take the industry’s carbon emissions way over their projected limit.

The group’s lawyer, Sam Hunter Jones, said: “The UK has already (approved) more gas capacity than the government’s own forecasts estimate will be required through to 2035.

“Approving Drax’s plant risks a carbon budget blowout, a huge stranded asset requiring propping up by the taxpayer, or a combination of the two.”

The government is meeting current climate targets but veering away from medium-term goals.

Last week, the energy regulator, Ofgem, confirmed that the rate of decarbonisation slowed last year, when it’s supposed to be accelerating.