Dubai Air Show: The challenges for us all in flying green 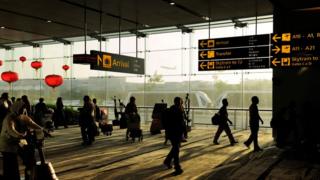 The airline industry is trying to develop greener solutions for our air travel, but will it be enough?

Sustainable, renewable, green: the buzz words of the environmentalists figured large at this week’s Dubai Air Show. At the last show two years ago, such things barely registered.

This time we’ve had airline Etihad rename a Boeing 787 Dreamliner a “greenliner” and Airbus unveiling an experiment in which aircraft follow each other to reduce drag and save fuel. It mimics bird flight.

No press conference seems complete without a reference to aviation efficiency, and the president of Emirates airline even praised activist Greta Thunberg for helping focus minds on what they had to do.

Trouble is, not only does aviation contribute 2% of global emissions, that figure is set to rise over the next few years. No wonder critics reject aviation’s pledge to become sustainable as hollow.

So, have we seen greenwash in Dubai or a genuine commitment to change? What are airlines doing to help tackle the climate crisis? And can the industry really wean itself off fossil fuels?

The BBC’s Talking Business programme went to the air show to speak to experts involved in aviation’s attempt to clean up its act.

Aero-engines are at the heart of the issue, of course. While critics are quick to condemn the industry’s rising emissions, things would be so much worse without advances in engine technology, says Phil Curnock, chief engineer, civil future programme at Rolls-Royce (RR).

“We have come a long way,” he says. “Engines are some 50% more efficient than 30 years ago.” That may be little consolation when airlines are still chucking more emissions into the atmosphere. But it is illustrative of the impact new technologies can make, he says.

For example, the firm’s new UltraFan, set for commercial use in the next decade, is one of the biggest leaps in engine technology for 50 years. “And once you’ve got the latest gas turbine on your aircraft, the next thing to do is look at the fuel you’re burning,” he says.

Commercial airlines are forecast to use about 97bn gallons of jet fuel this year, a record. But, says Alejandro Rios Galvan, a bioenergy expert and professor at Khalifa University in Abu Dhabi, there is simply no alternative available in the short term.

He believes plant based bio-fuels currently offer the best option. “These have the capacity to reduce the carbon footprint anywhere between 50-80% when you compare them to fossil.”

Bio-fuels are already being used in very small quantities. All flights from Los Angeles and Oslo, for example, carry a tiny bio-fuel mix. But there are many issues around price and production of this fuel.

A problem is that airlines operate on wafer thin profit margins. They are not going to adopt anything that increases their cost base, he says. But he adds: “The costs [of bio fuels] have come down significantly as more infrastructure is built to refine these products. It may only be a few years before they can compete on par basis with cost of fossil fuel.”

One route is to get rid of fuels completely, or perhaps combine them in electric hybrid engines. It’s not an option for huge long-haul airliners. But for smaller aircraft covering perhaps 1,000 miles “electrification is a really good opportunity,” says Mr Churnock. “It offers the possibility of a carbon neutral flight for a limited range.”

Airbus has been a leader in electric development. Sandra Bour Schaeffer, the European planemaker’s head of demonstrators, said that every tonne of fuel saved means a saving of three tonnes of CO2 emissions. “So it is absolutely crucial that work is done on the electric engine side.”

And the industry is getting close to real commercial breakthrough technology, Ms Bour Schaeffer said. In 2015, Airbus’ E-Fan all-electrical aircraft crossed the English Channel on 60 kilowatts of power.

In 2021 the company’s E-FanX hybrid electrical aircraft will use two megawatts. “It’s a huge improvement,” she said. “It’s about learning and stretching the technology.”

And yet, these developments are only medium to long-term solutions. Ms Bour Schaeffer doesn’t foresee commercial electric aircraft flying until the mid-2030s. The aviation industry has committed to halving emissions by 2050. With air travel set to double over the next 20 years, that target looks a tall order.

But just because big breakthrough technologies are years away does not mean nothing can be done in the short term, the BBC’s expert panel say.

The Airbus E-Fan X has a hybrid engine

There are multiple improvements being made: better aircraft aerodynamics, changes to ways aircraft taxi on runways, use of lighter materials, improvements to airspace use to allow more straight-line flying and reduce holding patterns.

An Airbus project called “Fello’fly” will experiment with aircraft flying behind each other. The idea is that the trailing aircraft flies in the updraft of the one in front, allowing it to reduce engine thrust. Sound fanciful? Ms Bour Schaeffer says this pairing of aircraft can save 5-10% in fuel.

Mr Churnock points to another easy win. If an aircraft descends into an airport at constant rate it can save about 150 kilograms of carbon. “These are really simple things that can be done through good air traffic control. They can have an impact in the short term while we are developing the bigger harder-hitting technology.”

Such things don’t necessarily make good headlines. But cumulatively they can make a difference. The issue for aviation, though, is whether it’s enough in the short term to stave off taxation, regulation, protests and “flight shamers” until the industry can prove its long term solutions are working.