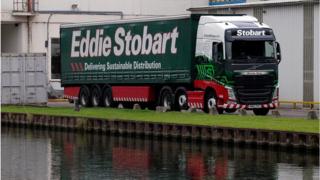 Eddie Stobart has suspended trading of its shares and announced that chief executive Alex Laffey will stand down with immediate effect, as the firm looks into an accounting error.

In a statement, the firm said that it also intended to review the group’s current dividend policy.

The transport logistics company, known for its green lorries, revealed a £2m discrepancy in its accounts last month.

Sebastien Desreumaux, currently head of iForce, will take over from Mr Laffey.

A review of its statements by new chief financial officer, Anoop Kangits, found that the 2018 adjusted operating profit figure of £55.3m was overstated by about 4%.

Publication of the firm’s financial results for the six months to 31 May 2019 has now been delayed to early September.

The firm added that half year profits were likely to be “significantly lower” than suggested in a recent trading update, and that it is “applying a more prudent approach to revenue recognition”.

Founded by Edward Stobart in 1970, the firm operates 2,700 vehicles and 43 logistical hubs in the UK and Europe, and employs around 6,600 people, according to its website.