Electric cars: Best and worst places to charge your car

November 2, 2019 by Joshua Marshall No Comments 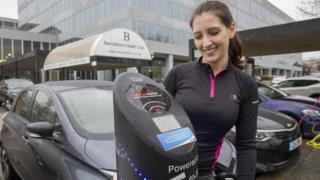 The government has published new league tables showing which regions of the UK have the most charging points for drivers of electric vehicles.

The most per 100,000 people are in London, followed by Scotland, while Yorkshire is the worst by that measure.

Outside London, Orkney and Milton Keynes have the most. But Barrow-in-Furness and Scilly each have none.

The government is offering local authorities £5m in funding for new charging points.

The government wants the UK to have net zero carbon emissions by 2050.

Scottish Power estimates that in order to achieve this, the UK needs to have 25 million charging points for electric vehicles – the equivalent of installing 4,000 a day – and 23 million electric heat pumps to replace domestic gas boilers.

Scottish Power’s chief executive, Keith Anderson, told the BBC’s Today programme last month that people needed to see there was a network in place in order for them to change, for example, to cleaner modes of transport.

Last month, the government announced that drivers of electric cars across the UK could soon be using special green number plates under new plans.

The aim is to make it possible for local authorities to allow zero-emission vehicles to benefit from incentives such as cheaper parking.

The government hopes it will boost electric car sales, helping it achieve its 2050 target of net zero emissions.

But Friends of the Earth said that without better financial incentives and more charging points, little would change.

Despite being on the rise, all-electric vehicles still represent only a fraction of total car sales and there are challenges to uptake, including a lack of charging points on roads and too few low-cost models.

The government said a similar licence plate scheme, introduced on a trial basis in the Canadian province of Ontario, had led to an increase in electric vehicle registrations.

Critics say it could foster resentment and a scrappage scheme for fuel-burning cars would be better.

While the cars can be expensive compared to petrol ones, they are also challenging to make commercially from scratch.

In October, Dyson, the technology company best known for its vacuum cleaners, scrapped a project to build electric cars.

The firm, headed by British inventor Sir James Dyson, said its engineers had developed a “fantastic electric car”, but that it would not hit the roads because it was not “commercially viable”.

In an email sent to all employees, Sir James said the company had unsuccessfully tried to find a buyer for the project. The division employed 500 UK workers.