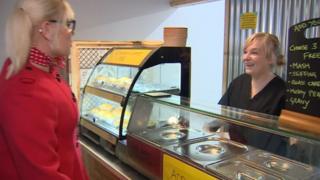 Julie Fletcher, who founded Middlesbrough shop Pie Jackers, is concerned about the high level of her rates bill

Some councils lose out on millions of pounds of potential business rates income through a tax relief on empty properties, BBC analysis shows.

A local authority mayor in northern England said the money “added up to a lot” and the system was unfair.

The Treasury said it would announce a review of business rates “in due course”.

What are business rates?

Business rates are similar to council tax for business properties. They are paid by businesses, or landlords if a property is empty.

Councils currently keep around 50% of business rates in their area but are expected to keep 75% from 2021. The revised scheme will see local authorities “take on the risk of decline as well as the reward for any growth”.

Rates do not have to be paid on empty businesses for three months, such as when shops close down or move.

Andy Preston, independent Mayor of Middlesbrough, said: “There’s a window where we lose money and that adds up to a lot, so we’re doing everything we can to help make sure we can sustain businesses.

“We’re trying to bring people into town to live here, for leisure, to work, but it’s a big battle, and what’s worse, an unfair battle.

“We need to get a much fairer system from central government.”

Councils across the country are caught between a rock and a hard place.

The rock is that many local high streets are “dying” and business rates are just one of the reasons why retailers are struggling.

But the hard place – is that business rates generate some £25bn a year for local government to spend.

Whilst some councils would like to see business rates reformed or even abolished, many also fear a major overhaul of the business rates system that could see them lose a vital source of income to fund local services.

Some smaller businesses argue the rates system should be reformed to bring down costs.

Pie Jackers owner in Middlesbrough Julie Fletcher said she had put her “heart and soul” into the business but may have to close due to an “astronomical” rates bill.

“It will have a massive impact, it will stop us employing another person and we just feel like there should be more support,” she said.

Dr Kevin Muldoon-Smith, a lecturer in public sector finance and property development at Northumbria University, said: “Unfortunately, we have this perverse situation where local government needs tax to go up and the business community are lobbying very hard for it to go down.”

Which areas lost the most income to empty units?

The collapse of the SSI steelworks in Redcar and Cleveland in 2015 led to a loss in business rates of around £10m.

Around £3m was given to the council as part of a government “safety net” bailout but the local authority was still faced with millions of pounds of lost income and no rates on the site going forward.

The local council has estimated the closure will see it underfunded by £12.5m to 2025.

Rules around business rates are different in Scotland and Wales. Empty premises cost an estimated £26m in Wales.

In Scotland, up to one in ten business premises receive empty premises relief, which totals £82m across the country.

Where are empty premises costing the most?

Councillor Richard Watts, who chairs the Local Government Association’s Resources Board, said business rates were “an extremely important source of income” for local government at a time when they face an overall funding gap of £8bn by 2025.

“The Government must commit to moving forward with vital reforms, which include addressing business rates avoidance and the impact of reliefs, such as empty premises relief,” he said.

This week, the boss of department store chain Beales, said councils “don’t really care” about supporting high streets, because they could depend on landlords paying rates on empty shops when relief ran out.

A Treasury spokesman said: “Empty property relief strikes a balance between incentivising property owners to put vacant properties to use, while not penalising those who lose a tenant at short notice.”

He said the system had been designed to redistribute rates income according to the needs of local areas.

More about this story

The Shared Data Unit makes data journalism available to news organisations across the media industry, as part of a partnership between the BBC and the News Media Association.