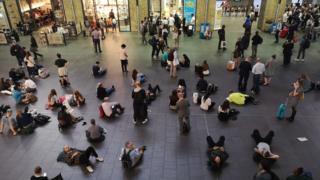 Three energy firms are to pay a total of £10.5m following August’s power cut that left over a million people without electricity and hit rail services.

The payments have come alongside recommendations to prevent a repeat.

More than a million people lost power during the National Grid outage in August, which affected homes, businesses and transport.

The lights went out just before 17:00 BST on Friday 9 August, causing blackouts across the Midlands, the South East, South West, North West and North East of England, and Wales.

While the power cut lasted for less than an hour, problems on the rail network carried on over the weekend.

In the days immediately after the power cut National Grid promised it would “learn the lessons” of the incident, although it said its systems were not to blame.