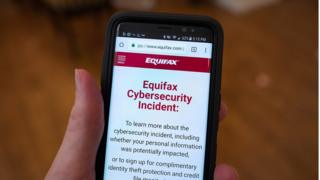 The credit firm holds data on more than 820 million consumers

The US has charged four Chinese military officers over the huge cyber-attack of credit rating giant Equifax.

More than 147 million Americans were affected in 2017 when hackers stole sensitive personal data including names and addresses.

Some UK and Canadian customers were also affected.

Announcing the indictments Attorney General William Barr called the hack “one of the largest data breaches in history”.

According to court documents, the four are allegedly members of the People’s Liberation Army’s 54th Research Institute, a component of the Chinese military.

They spent weeks in the company’s system, breaking into security networks and stealing personal data, the documents said.

The group are also charged with stealing trade secrets including data compilation and database designs.

Equifax said hackers accessed the information between mid-May and the end of July 2017 when the company discovered the breach.

The credit rating firm holds data on more than 820 million consumers as well as information on 91 million businesses.

In a statement Mr Barr said: “This was a deliberate and sweeping intrusion into the private information of the American people.

“Today we hold PLA hackers accountable for their criminal actions, and we remind the Chinese government that we have the capability to remove the internet’s cloak of anonymity and find the hackers that nation repeatedly deploys against us.”

China has not yet commented on the charges.