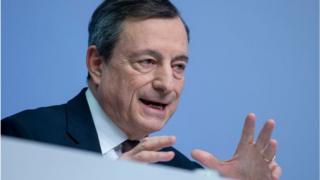 The European Central Bank has unveiled fresh stimulus measures to bolster the eurozone, including cutting a key interest rate.

The deposit facility rate, paid by banks on reserves parked at the ECB, was already negative, but has now been cut from minus 0.4% to minus 0.5%.

The ECB also said it was re-starting quantitative easing. It will buy €20bn of debt a month from 1 November.

The eurozone’s main interest rate has remained unchanged at zero.

The moves come as the ECB combats an economic slowdown.

ECB chief Mario Draghi said in July that uncertainty caused by trade tensions and “the possibility of a hard Brexit” was weighing on the eurozone economy.

The bloc’s biggest economy, Germany, is widely thought to be on the brink of recession.

Mr Draghi is due to make way for incoming ECB President Christine Lagarde on 1 November.

The ECB’s main refinancing rate has been at zero since March 2016.

“At first glance, the ECB has not quite thrown the kitchen sink at the eurozone economy,” said Ranko Berich, head of market analysis at Monex Europe.

“The QE package is shy of market expectations, which were €30bn a month. But the Bank is clearly back in the business of serious policy easing and more aggressive action could easily be taken in response to a worsening in conditions.”