‘Everyone has been kicked out of their rooms’ 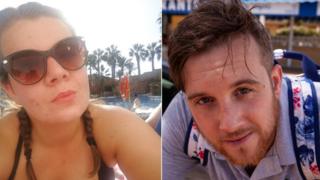 Jess Beeton and Richard Berrington are on holiday on the Costa Almeria, Spain

Holidaymakers who were abroad when Thomas Cook folded have been telling the BBC that their hotels have been demanding extra money from them.

But Jess Beeton, on holiday with her partner Richard Berrington, said “everyone who booked through Thomas Cook has been locked out of the rooms”.

She added: “The only option we were given was to pay what Thomas Cook hasn’t, or get our stuff and leave.”

Jess said that after the hotel locked them out, she managed to gain access to their room by saying she had medication there that she needed to take.

Once inside, she and Richard locked themselves in, but they have since paid £520 on a credit card so they can stay at the hotel until their due departure date from Spain on Sunday.

She added: “Most of the people in this hotel are elderly and about five couples of pensioners are having to sleep on sofas in reception with none of their belongings or access to food. They haven’t even been provided with a blanket or pillow.”

Hayley Hook and her family are on holiday in Greece.

She says they have been forced to give their credit card details to hotel staff and that at one point, security guards were brought in – although they have since left.

She posted on Facebook that the hotel was demanding €50 (£44) per person, per room per night and it said if they did not pay, it would stop supplying them with food and drink.

Security guards were brought into Hayley Hook’s hotel in Greece

Holidaymakers like Hayley may have paid for their rooms months earlier, but hotels would normally only receive the money from Thomas Cook several weeks after their stay.

But the industry insurance fund Atol, which covers payments in the event of a firm failing, will only cover bills for rooms and food that have been run up since Thomas Cook’s collapse on Monday.

That means any arrears built up at hotels beforehand will not be covered. Affected hoteliers will have to apply to the liquidators for their money instead – but there is no guarantee they will be successful.

Hotels may be worried that they are not going to be paid money they are owed for previous Thomas Cook guests, and therefore attempting to recoup costs by charging current guests.

Or they may simply not feel confident the money will come through from Atol.

‘Afraid to leave the hotel’

Graeme Renwick said that in his hotel in Mallorca on Monday night, “there was chaos at reception with staff shouting at guests when there were no Thomas Cook staff present and the hotel saying ‘you’re going to have to pay us'”.

He added: “We’re Atol-protected, and the hotel are, but I don’t think they trust that Atol is going to pay them.”

His fiancée Clare McSweeney said: “Things have become very fraught in the hotel. Another guest, a 77-year-old lady, first time travelling alone, is distraught, with her son back in the UK trying to assist.

“Guests are too afraid to leave the hotel or stray too far in case anything happens.”

How are customers protected?

If you are on a package holiday, you are covered by the Atol scheme.

What are your rights? Read more here.

Other hotels have taken the opposite approach. Maeve Pendlebury said the hotel where she and her partner are staying in Rhodes “could not have been kinder or more hospitable”.

Managers of the Atrium Prestige wrote to guests to reassure them that “in spite of this unprecedented outcome that results in large debts” for the company, they should continue to enjoy their holidays as planned.

Thomas Cook reps around the world have also received praise from holidaymakers.

Dan Birch is in Lanzarote with his partner and daughter and told the BBC: “The reps are there, still working and speaking to people, which is amazing. They are really trying to help people.”

Dan Birch, who is in Lanzarote with his family, says there is anger towards the hotel

He said some guests had moved to a cheaper hotel after they were told they had to pay for their accommodation.

But he said: “They know it is not the reps’ fault and the anger here is directed to the hotel.”

Michael Sheppard and family were due to return home from Corfu on Monday morning and as they had only booked a flight home through Thomas Cook, knew they had no Atol protection.

He said: “When we got to Corfu airport we were amazed to see four smiling Thomas Cook staff working hard to help people.

“When I spoke to them they did not think they were going to be paid but they had come to help anyway – how professional, dedicated and caring – I was incredibly moved.”

“The crew were Thomas Cook staff, who had been offered two weeks’ work by the lease company to do the rescue flights,” he said.

“They got a huge round of applause both at the beginning and at the end of the flight.”

On Monday, the CAA started repatriating British holidaymakers who were abroad at the time that Thomas Cook collapsed.

There will be more than 1,000 flights between now and Sunday 6 October to repatriate the remaining 135,300 holidaymakers, with 74 of those, returning around 17,000 people, scheduled for Tuesday.

The CAA has set up a dedicated website to keep Thomas Cook customers updated with the latest advice and news.

It is running a call centre and Twitter feed with open direct messages to respond to holidaymakers 24 hours a day, seven days a week.