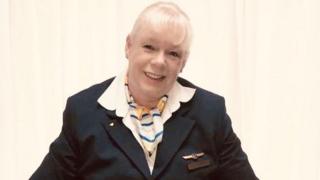 “I really loved getting up at 2am,” remembers former cabin manager Sian Pike

When Thomas Cook collapsed, thousands of employees suddenly found themselves without a job – but 30 of them have been fast-tracked for new jobs on trains after Great Western Railway (GWR) made a plea for cabin crew and ground staff to get in touch.

Sian Pike, who had been with Thomas Cook for 26 years and was an airline cabin manager, is one of them.

“My life had been flying, and suddenly it was ripped away from me, leaving me feeling really numb,” said Ms Pike.

“I used to tell passengers I’d be flying until they kicked me out.

“My uniform is still in my wardrobe, my bags are under the stairs.

“It was a way of life. I was literally going to be there with my Zimmer frame going down the aisle.”

The collapse led to the biggest-ever peacetime repatriation of 150,000 stranded holidaymakers

“On the very last day, our flight was sent to the remote stands of the airport,” remembers Jamie Iaquaniello from Dartford, who worked on one of the last flights from Antalya in Turkey to Gatwick Airport.

“We could see the other Thomas Cook planes so we realised something was happening by then.

“We were customs searched when we left the airport because they thought we would steal all the duty-free on the way out once we knew we were redundant.”

Mr Iaquaniello joined a conference call with the administrators the following day.

“They just said good luck to us all and that was it.

“Some of us were retained to bring stranded holidaymakers back, which was hard because the aircraft were still painted with the Thomas Cook livery.

“They couldn’t start applying for jobs even though they knew they would be redundant.”

Thomas Cook planes were grounded when the company collapsed in September

Ms Pike, who lives in Cardiff but was based at Bristol, said: “I applied to several airlines, because my heart said ‘I need to keep flying’, and it was overruling my head.

“I then thought I would try GWR since there were parallels with my flying career – safety, customer service and the irregular hours.

“I really loved getting up at 2am for a customer service role so this job is perfect for me.”

She is currently midway through training to be a customer host for the train operator, alongside several of her former colleagues.

“Unfortunately we won’t be selling duty-free on the train but you never know,” she joked.

Mr Iaquaniello rang GWR the morning after he was made redundant, and was in training three weeks after he left Thomas Cook.

He now works from London Paddington, travelling across the South West.

“At first it was strange but I enjoyed the challenge of learning new things again.

“The good bits from aviation are also in rail – the camaraderie, it’s all laughs and jokes – and people were really supportive.

“I’m one of the lucky ones. So many people are still trying for aviation jobs and they won’t start until March – and some airlines don’t even pay for training.

“We saw the commitment they were making to their customers on that last day, staying out and making sure everyone got home all right.

“They were providing great customer service, and a member of our recruitment team thought we should offer them our support.

“Our tweet that we put out reached 500,000 people and dramatically increased the traffic to our recruitment website.”

Both former cabin staff have found it odd seeing parts of their former work life appear for sale online.

“It’s funny, you can still see the old chocolate desserts we used to sell being auctioned on eBay”, said Mr Iaquaniello.

“I know someone who bought a trolley from one of the planes,” said Ms Pike.

“As a trainer I collected all the mugs, Sindy dolls, everything we were given as branded items and they are all being held on to.

“Losing my job was like a bereavement, but we’re really lucky to be in work again so soon.”