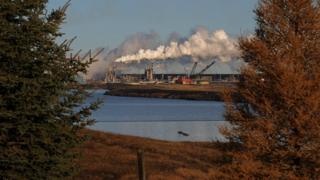 An unprecedented climate change lawsuit against American oil giant Exxon Mobil is set to go ahead in New York.

The state has accused the company of misleading investors about the potential costs of climate regulation to its business.

Exxon says it shared the necessary information and the claims are politically motivated.

The case is at the forefront of a rising number of legal actions faced by oil and gas firms.

Exxon’s trial on the fraud claims will start on Tuesday and is expected to last 15 days. Former US Secretary of State Rex Tillerson, who led Exxon for a decade, is among those likely to appear in court.

“It’s a major milestone as a part of a growing wave of cases that Exxon and other major oil companies are facing, not only here in the United States, but in fact in jurisdictions around the world,” said Carroll Muffett, president of the Center for International Environmental Law.

In court filings, the state says internal documents show Exxon evaluated new projects based on forecasts for costs associated with climate change that were lower than those it told investors it was using.

Those calculations made investments appear less risky and more valuable.

“By representing that it was applying higher projected carbon costs than it was actually using, ExxonMobil made its assets appear significantly more secure than they really were, which had a material impact on its share price,” the state wrote.

Exxon does not dispute the claims that it used two calculations to evaluate the cost of potential regulation.

However, the firm argues that those calculations were “proprietary” and investors were not misled.

“Reasonable investors who reviewed ExxonMobil’s disclosures understood that climate risks factored into ExxonMobil’s decision-making, which is all that could have mattered to them,” it says.

Activists pressed Exxon for years to be more transparent about how climate change affected its business, partly due to hopes that accurate estimation of the financial risks would shift money to more sustainable alternatives.

Analysts said the New York case is an example of the kind of experimentation occurring as governments seek to hold companies accountable for climate change.

The state of Rhode Island has filed claims against Exxon and BP, citing damage along its coast. Authorities in the Philippines and Canada are investigating fossil fuel companies as well.

In recent weeks, the attorney general in Massachusetts has indicated plans to proceed with a case that accuses Exxon of deceptive marketing.

“Regardless of the outcome [of the New York case] the reality that is clear and not inescapable is that the future of Exxon and [other fossil fuel] companies is filled with litigation and it’s only going to grow.” Mr Muffett said.