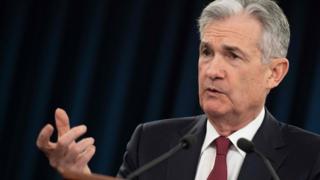 The Fed is trying to interpret mixed economic signals

The US central bank has cut interest rates again, hoping to shield the economy from the impact of trade wars and a global slowdown.

The Federal Reserve lowered the target for its benchmark rate by a quarter point, to a range of 1.5% to 1.75%. The move was the third cut in four months.

The decision comes as US economic growth slowed to an annual rate of 1.9% in the most recent quarter.

However, the move divided policymakers, raising questions about further cuts.

Eight people voted in favour of reducing the rate, while two opposed the action.

Wednesday’s cut was expected, but some analysts said the Fed is likely to hold off on further reductions, noting that the bank had removed its promise to “act as appropriate to sustain the expansion” from its latest statement.

The debate over the bank’s next move reflects an economy that is sending mixed signals. While growth has slowed, it has held up better than expected, decelerating only slightly from the 2% rate seen in the three months to 30 June.

The expansion has been bolstered by spending by consumers, who are enjoying some of the lowest unemployment rates in almost 50 years.

However, business investment continues to fall, as firms grapple with uncertainty generated by the US-China tariffs war and other trade disputes.

The global economy has decelerated and inflation also remains somewhat lower than the Fed would like, moderating fears that further cuts will trigger a damaging acceleration in prices.

The Fed said: “In light of the implications of global developments for the economic outlook as well as muted inflation pressures, the Committee decided to lower the target range.”

As growth has softened, US President Donald Trump has sought to pin responsibility on the Fed. He has repeatedly called on the bank to cut rates more aggressively, pointing to the low borrowing costs in other countries.

Dr. Kerstin Braun, president of Stenn Group, an international provider of cross-border trade finance, said looking to the Fed to solve the issues in the economy won’t work.

“The US needs to end uncertainties about global trade while also implementing fiscal policies that foster investment in infrastructure and innovation,” she said.

The Fed is “squandering” its power despite lack of a real crisis, she added.

“The stock market is peaking, consumers are still spending, and the tariff war could be resolved,” she said. “This isn’t the normal context for lowering interest rates.”