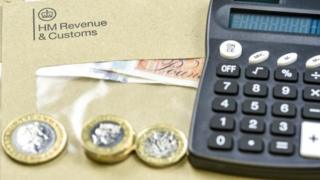 People required to complete a self-assessment tax form only have a short time left before a deadline at the end of Friday.

Some 11.7 million people, primarily those with more than one source of income and the self-employed, are required to complete returns.

By the end of Wednesday, HM Revenue and Customs (HMRC) said there were still 2.1 million people left to file.

Fines can be issued immediately for late filing.

Paper returns had an earlier deadline of 31 October, but the vast majority of people fill in the forms electronically for which the deadline is 31 January.

The tax authority said that previous, and failed, excuses for missing the deadline in recent years had included someone claiming they were unable to log on because they were up a mountain in Wales, another saying he was too busy working as a DJ in a bowls club, and one claiming their mother-in-law put a curse on them.

Tax specialist Chas Roy-Chowdhury said that the coinciding of the deadline with Brexit would not be a reasonable excuse to fail to submit the return and pay tax on time.

The current system means HMRC could demand a penalty of £100 for late filing during the first three months after the deadline.

After three months, additional penalties of £10 per day can be demanded, up to a maximum of £900, followed by further charges six and 12 months after the deadline.