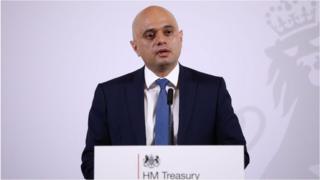 Chancellor Sajid Javid has set 11 March as the date for his first Budget – the first since the general election.

Mr Javid says billions of pounds will be invested “across the country”.

The Treasury will “prioritise the environment”, he said, and reiterated a plan to make use of low borrowing rates to spend on public services.

John McDonnell, Labour’s shadow chancellor, said he doubted whether the government would deliver on its investment or climate goals.

Mr Javid will update his cabinet colleagues on the performance of the economy before facing MPs later on Tuesday.

He cancelled a 6 November Budget in October to make way for the general election.

This means that the Office for Budget Responsibility, which monitors the government’s performance on money management, may not be able to comply with its legal requirement of publishing two forecasts per financial year, which ends on 31 March.

The Budget is the government’s yearly announcement on its plans for tax and spending for the coming financial year, which starts in April.

“After a decade of wrecking the economy, we can have no confidence in a Tory government delivering the scale of investment needed for renewal, especially with a no-deal Brexit still on the table,” said Mr McDonnell.

“The lack of foresight in not focusing this budget on the threat of climate change is also criminally irresponsible.

“The government has learnt nothing from the fires in Australia and the floods on Indonesia. This will be a budget of climate change recklessness, not renewal.”

This is not just about a change of date for a Budget originally postponed because of the Brexit delay and then an election.

A rewiring of the Treasury is in the works. First, the Budget to be presented on 11 March will be quite fundamentally different to the Budget that never happened. The election result gives a Commons majority and a mandate to act confidently and decisively, and in a manner that fleshes out the election rhetoric about “levelling up” – helping slow-growing regions of the economy.

In the intervening two months, the Treasury will have to work up a new national infrastructure strategy that delivers on the plan to rebalance regional inequalities, some of which stem from decisions made nationally on, for example, transport spending.

Insiders suggest that the changes could reach into the heart of the Treasury, taking up advice from independent economists and regional mayors to change the way that the government calculates the value for money of public spending on investment projects.

The so-called “Green Book”, used to evaluate big investment projects, could be changed to rectify a formula and a process that biases government investment to where economic growth, high productivity, and high house prices are already concentrated – in and around London.