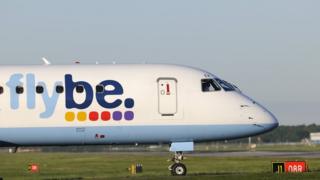 Flybe’s owners are trying to borrow £100m as a short-term loan from the government.

Connect Airways has also agreed to put £20m extra cash into its troubled regional airline, according to sources.

The company confirmed last week it was seeking a loan on “commercial” terms but not how much it wanted to borrow.

At the time Flybe boss Mark Anderson told staff it had had “difficult days” but still had “a great future”. He said the loan would not be a bailout.

That would be on top of the £30m already promised.

News of the amount being sought by Flybe was first reported by the Financial Times newspaper. The airline declined to comment.

If it succeeds, it will be an unusual move by the government, which declined to assist Thomas Cook when it asked for a loan.

EasyJet and Ryanair have said taxpayer funds should not be used to save a rival.

Flybe has been struggling under the weight of a £10m bill for air passenger duty as well as a slowdown in demand that has hurt the airline’s finances.

It services dozens of UK domestic routes that are not flown by other airlines, making it the largest carrier to fly out of some regional airports, like Newquay.