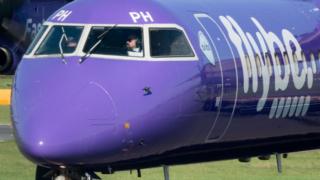 Troubled regional airline Flybe has struck a rescue deal with its investors and the government.

The firm’s shareholders, which include Virgin Atlantic and Stobart Group, have agreed to put more money into the loss-making airline.

Meanwhile, the government has agreed to review air passenger duty, which had added to the firm’s losses.

“Delighted that we have reached agreement with Flybe’s shareholders to keep the company operating, ensuring that UK regions remain connected,” she tweeted.

“This will be welcome news for Flybe’s staff, customers and creditors and we will continue the hard work to ensure a sustainable future.”

Transport Secretary Grant Shapps said the government had worked closely with Flybe to ensure its planes were able to continue flying.

He said on Twitter that the Department for Transport would conduct an urgent review that will seek to assess how it can improve regional connectivity.

The government has promised to review the amount of air passenger duty levied on domestic UK airline routes.

The prospect of cutting taxes on flying has angered climate activists who argue that flying is the most carbon intensive mode of transport.

However, the government has said the review of the tax will be consistent with its zero carbon targets.

The Treasury also said it would work with Flybe to figure out a repayment plan for the significant air passenger duty debt.