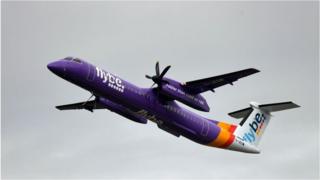 The bailout of airline Flybe has been branded a “misuse of public funds” by a rival, as environmental campaigners also criticised the move.

Willie Walsh, the chief executive of the owner of British Airways, attacked the government’s plan in a letter to Transport Secretary Grant Shapps.

The rescue defers some tax payments, thought to top £100m.

“Prior to the acquisition of Flybe by the consortium which includes Virgin/Delta, Flybe argued for tax payers to fund its operations by subsidising regional routes.

“Virgin/Delta now want the taxpayer to pick up the tab for their mismanagement of the airline,” Mr Walsh said in his letter. “This is a blatant misuse of public funds.”

“Flybe’s precarious situation makes a mockery of the promises the airline, its shareholders and Heathrow have made about the expansion of regional flights if a third runway is built.”

Although the terms of the direct assistance were not disclosed, they are understood to include forbearance on Flybe’s Air Passenger Duty (APD) payments.

Airlines collect the duty from passengers as part of their ticket price, and then hand it over to HMRC.

It is understood Flybe could be given up to three months’ breathing space to pay about £100m worth of duty.

The ministers have also agreed to review the future of £26 air passenger duties on domestic flights in a move attacked by environmental campaigners.

“Addressing Flybe problems by reducing APD on all domestic flights is utterly inconsistent with any serious commitment to tackle the Climate Crisis,” Ms Lucas said in a tweet. “Domestic flights need to be reduced, not made cheaper.”

But the government has said the review of the tax will be consistent with its zero carbon targets.

Mr Walsh’s letter points out that Virgin is part owned by Delta Air Lines of the United States, which is one of the world’s largest and most profitable airlines. He argues that Virgin and Delta together have the resources to rescue Flybe, and they should not be asking for taxpayer support. Mr Walsh says Flybe has been mismanaged.

Flybe is already in receipt of some public money for its important Newquay-Heathrow route, which it operates under a “public service obligation” contract with the government.

The letter says that British Airways had indicated its willingness to operate that route without assistance – in the summer only – but was excluded because of the Flybe deal.

Mr Walsh also warns the government that Flybe’s Heathrow operations could in time be diverted to long-haul routes – which would not be in line with its policy of promoting regional connections to London.

Mr Walsh has declined to comment publicly on the text of the letter, but it is in keeping with the long history of commercial battles between BA and Virgin Atlantic.

The two airlines have clashed repeatedly over the years, and remain bitter commercial rivals. Not only is Virgin a big shareholder in Flybe, but the latter’s services to Heathrow provided a vital feed of UK domestic passengers to the former’s long-haul services from Heathrow.

Other airline bosses contacted by the BBC also condemned the government bailout. But Rob Griggs, director of policy at Airlines UK, the industry trade body, defended the deal. He said Flybe’s being given time to pay air passenger duty was not the same as a direct injection of public funds.

The British Airline Pilots Association, a union, welcomed the news.

“This is good news for 2,400 Flybe staff whose jobs are secured and regional communities who would have lost their air connectivity without Flybe,” general secretary, Brian Strutton said in a statement.

Lucien Farrell, the chairman of Connect Airways – which owns Flybe – said the group had agreed to “keep Flybe flying with additional funding alongside government initiatives”.

“We are very encouraged with recent developments, especially the government’s recognition of the importance of Flybe to communities and businesses across the UK and the desire to strengthen regional connectivity,” he said.

The transport secretary said the government had worked closely with Flybe to ensure its planes were able to continue flying.

Mr Shapps said the Department for Transport would conduct an urgent review that will seek to assess how it can improve regional connectivity and ensure airports continue to function across the country.