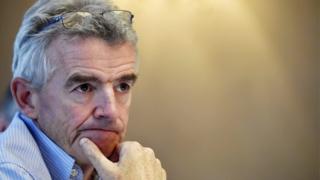 The boss of Ryanair has threatened legal action over the government help given to regional carrier Flybe.

He argues measures that are being put in place to help Flybe should be extended to other airlines.

If they are not, Ryanair intends to launch legal proceedings against the government, Mr O’Leary said.

Earlier this week, the government approved help for Flybe, which is thought to centre on giving the airline time to pay about £100m of outstanding Air Passenger Duty (APD).

Other airline executives have criticised the move as granting an unfair advantage to Flybe, which is owned by a consortium of Richard Branson’s Virgin Atlantic, Delta Airlines and Cyrus Capital.

Ryanair’s letter said that the government should clarify what support is being given to Flybe including details of any “APD holiday”. The same support should be offered to other competitor airlines including Ryanair, Easyjet and British Airways, it said.

“Should you fail to confirm these facts within the next seven-day period, please be advised that Ryanair intends to launch proceedings against your government for breach of UK and EU competition law and breach state aid rules,” the letter said.