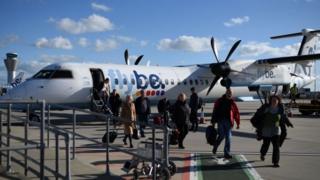 A year after being rescued by two of the world’s most successful airlines, Flybe’s future is again in doubt.

Some have blamed fundamental problems with the business model, others bad management, competitive pressures, unfair taxes, or the vagaries of the oil and currency markets. In truth, it’s a combination of all these, and more.

The firm’s boss Mark Anderson has told staff that the firm still has a bright future ahead of it.

But Flybe has been in financial turmoil for years, and there are arguments that if current investors Virgin Atlantic (49%-owned by Delta Air Lines), Cyrus Capital Partners, and Stobart Group, can’t make it work, who can?

The government sees enough value in Flybe to (surprisingly, perhaps) help with a rescue. So, how did we get here? And, crucially, is good money just being thrown after bad?

When did Flybe’s troubles begin?

The Exeter-based airline’s problems did not just emerge this month. It has long-suffered from overcapacity and rising costs.

There was a profit warning in 2017, with higher maintenance costs blamed as a major part of the problem.

Another profit warning in 2018 said Flybe would sink to a £22m loss, with the airline saying falling consumer demand, a weaker pound and higher fuel costs were the cause.

Flybe, then listed on the stock market, saw its shares tumble 46% in a single day.

Nevertheless, then chief executive Christine Ourmieres-Widener said: “We continue to strengthen the underlying business and remain confident that our strategy will improve performance.”

In November 2018, two weeks after that optimistic assessment, Flybe announced it was putting itself up for sale. The airline said it was “in discussions with a number of strategic operators about a potential sale” and could cut more flights.

Now a private company, the Flybe group is not due to file its next set of profit and loss figures with Companies House until 4 April. And these accounts will only deal with the airline’s profitability in the period to 4 July, 2019.

But given Connect Airways went cap-in-hand to the government for help, it’s safe to say that the airline’s financial position has worsened.

What is Flybe’s business model?

Flybe is a regional airline, which means it operates smaller aircraft and generally serves communities and airports that are too small to attract the big names in the aviation industry.

Against the likes of Ryanair or British Airways, Flybe is a minnow.

This is both a blessing and a curse.

Being able to reach the places that other airlines don’t is seen as vital for regional connectivity. Exeter MP Ben Bradshaw went so far as to describe Flybe as a UK strategic asset. On some routes the competition is really only rail or ferry, not other airlines.

And in a country where costly infrastructure projects such as HS2 and Crossrail take an eternity to build, Flybe has provided a nimble solution to tough transport problems. For example, some 68% of Belfast airport flights, and 90% of Southampton’s, are operated by Flybe.

The trouble is, Flybe can get “sandwiched” between the business model of budget airlines such as Ryanair and EasyJet, and the network carriers such as British Airways that use short-haul flights to connect with their long-haul services.

If Flybe’s routes to secondary and tertiary locations prove successful, the bigger players are likely to move in, operating the services at lower costs.

It does not help that many Flybe routes are within the UK, where, the airline has long complained, it is at a tax disadvantage.

Air Passenger Duty (APD) is a levy paid on each leg of the journey within the UK – departure and arrival. For international flights, it is only paid on the outbound ticket.

APD is thought to cost Flybe more than £100m a year.

What do we know about the rescue?

Given that Prime Minister Boris Johnson has made improving “regional connectivity” a key part of his industrial plan for the UK, seeing a regional airline go bust probably would not have looked good.

For days after Sky News broke the story that Flybe was on the brink of collapse and had lined up an administrator, the company declined to say anything meaningful about its plight. Then it emerged that the Connect consortium was in talks with the government about a rescue deal.

Details remain sketchy, but this is what we know.

This has raised many unanswered questions. Why is a Conservative government propping up failing companies? Is it right to rescue Flybe when there was no help for Thomas Cook and other collapsed businesses such as Carillion? Does it disadvantage other airlines? Is there a breach of state aid rules? Also, isn’t APD supposed to limit flying and help meet Britain’s climate change targets?

How do rivals feel about the rescue?

There has been a mixture of outrage and concern among Flybe’s rivals.

Willie Walsh, chief executive of British Airways’ owner IAG, called it a “blatant misuse of public funds” that “constitute unlawful state aid”. He has filed a complaint with Brussels.

EasyJet boss Johan Lundgren said that taxpayers cash should not be used to bail out a business with well-funded backers such as Virgin and Delta. And Ryanair said in a statement that the government should not “favour a financially profligate airline”. Ryanair has threatened legal action against the government.

The Rail Delivery Group, which represents train operators, said any review of APD “that encourages more people to fly domestically would limit efforts to tackle the climate crisis”.

The Chancellor, Sajid Javid, along with Business Secretary Andrea Leadsom and Transport Secretary Grant Shapps, have all been closely involved in the rescue plan.

The word from these departments, and also Number 10, is that the final terms of the rescue will be done in a fiscally responsible way that will neither neither breach state aid rules nor climate change targets.

The Prime Minister’s spokesman said “there has been no state aid to Flybe,” adding that “any future funding will be made on strictly commercial terms”.

According to Mr Shapps: “The actions we have taken will support and enhance regional connectivity across the UK, so local communities have the domestic transport connections they rely on.”

What is the future for Flybe?

Flybe has been through several restructurings over the past decade, suggesting there have been fundamental problems for years. The Connect consortium has not managed to knock the airline into shape in the relatively short time it has owned it. And many people believe that the government can provide only a short-term fix.

The government can’t do much about global oil prices and currency swings. An economic slowdown in the UK and the rest of Europe will pile pressure on an already weak airline.

According to one analyst, Flybe’s fragmented network and relatively small number of daily flights means it is difficult to achieve critical mass and means the airline is exposed to short-term changes in market conditions.

The acquisition by Virgin (and through it, Delta) will possibly help feed Flybe’s passenger traffic onto these network carriers but it has clearly not made much of a difference yet.

One rumour is that the government considered extending so-called public service obligations to a number of Flybe routes that were particularly important to regional communities. That, in effect, means subsidising them – always a controversial move.

But until full details of what is planned are disclosed, analysts say it is difficult to know whether Flybe can be put on a firmer footing.

Threats of legal action could only delay matters. And one thing Flybe doesn’t have is time.