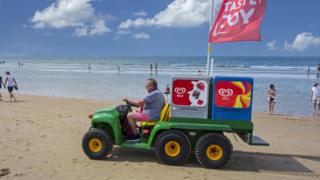 Food giant Unilever has vowed to stop marketing its products to children in order to tackle rising obesity rates.

The firm, which owns brands such as Twister ice cream and Popsicle ice lollies, said it would limit the use of cartoon characters in its advertising.

It also promised to stop using social media stars or celebrities “who primarily appeal” to children under 12.

The World Health Organisation has linked the marketing of unhealthy foods to rising childhood obesity rates.

The new rules will apply to all of the firm’s products by the end of 2020, kicking off with its Wall’s ice cream brands.

Wall’s will also launch a range of “responsibly made” products for children that contain “no more than 110 calories and a maximum of 12g of sugar per portion”.

The World Health Organisation (WHO) has said there is “unequivocal evidence” that the marketing of unhealthy foods is related to rising rates of childhood obesity and recommended that governments limit the reach of such advertising.

The UK introduced new rules for children’s advertising in 2017. Countries such as Chile, Mexico and Ireland have also implemented stricter rules over the last decade.

The firm, which has a reputation for leading the business world on issues such as sustainability, has had a policy for “responsible” marketing to children since 2003.

In its latest update, it said it planned “strict controls” on the placement of ads in movies and would not appeal to children under age 12 on traditional media or 13 on social media.

It has previously pledged to make adverts less sexist and threatened to pull ads from Facebook and YouTube if they do not do enough to police their content.