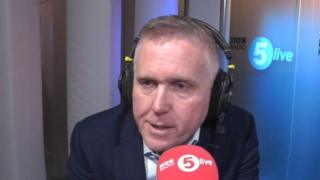 The boss of Ford Europe has raised concerns about a possible 2032 ban on petrol, diesel and hybrid cars.

The date was suggested by Transport Secretary Grant Shapps as part of a range of potential dates the government was looking at.

Reflecting on the announcement, Mr Rowley said: “Plug-in hybrids can be an important part of technology mix.”

He also called for more infrastructure investment for electric vehicles, including more access to chargers.

The potential 2032 ban, announced by Mr Shapps in a BBC interview, brings the date forward from 2035. This date had already been brought forward from 2040. Last week, the government also stated it is bringing plug-in hybrids into the ban “for the first time”.

Speaking on Radio 5 live’s Wake Up To Money, Mr Rowley called the target “hugely ambitious”, adding: “Whether we are going to achieve 2035 or 2032, it’s going to require huge investment and for us to work together as an industry, the government, cities and consumers to make this transition.”

Jim Holder, editorial director of Autocar publishers Haymarket Automotive, said: “Most manufacturers are spending hundreds of millions of pounds of investment, launching them [the cars] this year. All of a sudden they’re having the rug pulled from under their feet.

There are over 10,800 electric charging locations across the UK, but the majority are located in London.

“Of course that is terrible business, but it also undermines what they’re trying to achieve. They want a stepping stone technology towards fully electric cars. They understand that consumers on the whole are very interested in electric cars but they aren’t buying them. Just 1.6% of car sales last year were fully electric.”

In a statement, the Department for Transport said that plug-in hybrids are not always used in zero emission mode, which is why they are including them in the ban.

Mr Rowley also said that the government should focus more on investment into infrastructure. “Today very few people have the ability to charge an electric vehicle, whether it be at home or whether it be in public places.

“The investment in the infrastructure is going to be critical, that requires government investment, cities to organise for that, and people to be able to install charging in their homes,” he said.

According to Zap-Map, a phone app that helps drivers find charging points, there are over 10,800 electric charging locations in the UK. About 25% of them are located in London, but, for example, just 3% are in Wales.

Mr Rowley said: “We’re putting 1,000 charging facilities at our plants and offices, and we’re going to need to see more across the country, not just in the big cities.”