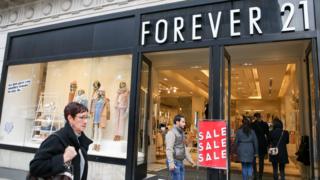 US fashion retailer Forever 21 has filed for Chapter 11 bankruptcy protection.

In a statement, the company said it planned to “exit most international locations in Asia and Europe”.

It comes as traditional retailers continue to struggle against rising competition from online rivals.

Forever 21 said it has obtained $275m (£224m) in financing from existing lenders and $75m in new capital to assist with a global restructuring.

Chapter 11 protection postpones a US company’s obligations to its creditors, giving it time to reorganise its debts or sell parts of the business.

“This was an important and necessary step to secure the future of our company, which will enable us to reorganize our business and reposition Forever 21,” the firm’s Executive Vice President Linda Chang said in a statement.

Last week, the retailer said it would pull out of Japan by October.

A spokesperson for the company said the decision to withdraw from the country followed “continued sluggish sales”.

Founded in 1984, Forever 21 sells cheap, trendy clothing and accessories. The fast-fashion retailer competes with other major high-street brands such as Zara and H&M.