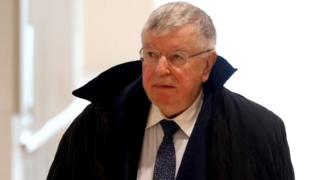 The ex-boss of France Télécom and two former executives have been jailed over a moral harassment policy linked to suicides among employees in the 2000s.

Didier Lombard was jailed for a year, as were Louis-Pierre Wenès and Olivier Barberot, although eight months were suspended.

The court examined 39 cases of employees, 19 of whom had taken their own lives and 12 who had attempted to.

The others had lived with depression or had been otherwise unable to work.

Four other executives were found guilty of complicity and given four-month suspended sentences and €5,000 fines.

Lombard, the former president and chief executive officer; Wenès, his deputy; and Barberot, the former director of human resources, were also given fines, of €15,000.

It is the first time that a French court has recognised “institutional harassment”.

The BBC’s Paris correspondent, Hugh Schofield, says the trial has been seen in France as a landmark case for relationships between workers and management.

At the time, the newly privatised company was in the throes of a major reorganisation. Lombard was trying to cut 22,000 jobs and retrain at least 10,000 workers.

Some employees were transferred away from their families or left behind when offices were moved, or assigned demeaning jobs.

“I’ll get them out one way or another, through the window or through the door,” Lombard was quoted as telling senior managers in 2007.

He accepted that the restructuring had upset employees, but rejected the idea that it had led to people taking their own lives.

Among the cases documented:

For help and support on mental health visit the BBC Advice pages.