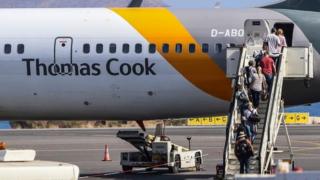 Scammers are suspected of making fraudulent claims on a website set up to refund Thomas Cook customers, the Civil Aviation Authority has said.

The aviation regulator said it has taken “urgent action” over the suspicious online activity and will notify the police.

It has added further verification checks to its refund process, it said.

A spokesman said that Thomas Cook customers themselves were also being targeted by fraudsters.

The Civil Aviation Authority (CAA) is administering refunds from the Atol travel fund, an insurance levy collected from travel firms.

It is understood to be concerned by a series of low-level claims which could indicate fraud.

The regulator said it would seek prosecutions where there was evidence of deception.

The CAA also warned some fraudulent claims management websites had been set up, echoing warnings made by consumer group Which? on Friday.

It said that Thomas Cook customers should only make claims directly through its dedicated website.

About 100,000 claims have been made since Monday morning when the refunds website went live.

It was set up to let people with Atol-protected Thomas Cook holidays that were due to begin after the firm collapsed on 23 September claim refunds.

Atol-protected customers who were already abroad when Thomas Cook failed can also claim for out-of-pocket expenses for delayed flights.

The CAA has said it will pay refunds within 60 days of receiving a valid claim and wants to crack down on fraudulent activity to avoid delays.

Dame Deirdre Hutton, who chairs the organisation, said: “This morning we have taken urgent action in response to what we believe is attempted fraudulent activity in relation to refunds for Thomas Cook customers.

“If you have made a claim directly with us, then your claim is being processed and you do not need to take any action.”

She added: “Please help us to combat the risk of fraud by not submitting your details to any other website.

“Our focus is on getting money back to the right people as soon as possible and combating fraud in every way possible.”

The CAA apologised on Monday after its system struggled to cope with “unprecedented demand” in the hours after it launched.

Many people received an error message after entering their details, meaning their claims were not submitted.