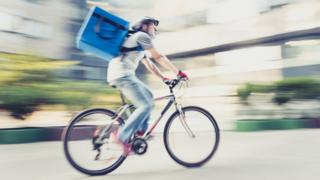 Contractors and other flexible workers should enjoy a higher minimum wage than those with secure employment, the Demos think tank has urged.

A higher rate would insulate workers from some of the risk they face as a result of unsecure earnings.

The think tank also suggests that banks or trade unions could administer benefits such as holiday pay.

The report, financed by NatWest bank, suggested access to loans and mortgages was poorer for flexible workers.

“Self-employed workers are not protected by the safety net that many of us take for granted, from sick pay to maternity cover,” said author Ben Glover

“This bargain is only fair if self-employed people earn enough to cover the additional risk they take on, but too often in Britain today this is simply not happening. That’s why we are calling for a new, higher minimum wage for the self-employed.”

Having another body rather than government oversee employment benefits would be similar to the so-called Ghent system, named after the Belgian city where the idea was piloted. Countries including Denmark have adopted a similar plan.

“Workers in these countries voluntarily join unemployment schemes and, after having contributed to these schemes for a certain amount of time, are able to enjoy fairly generous unemployment insurance, amongst other benefits,” it said.

Flexible workers include the self-employed, freelancers, those employed in the so-called gig economy, such as Uber taxi drivers, agency and temporary workers, those on zero hours contracts, and people with several jobs, it said.

Demos does not recommend an hourly figure, but says the Low Pay Commission should investigate what it ought to be.

Other recommendations include training from the government and banks on managing finances when being self-employed, and automatic pension contributions.

At present, the government’s National Living Wage pays £8.21 an hour for workers aged 25 and over.

The Conservatives plan to lower the age limit for the National Living Wage to 21 and pay around £10.39 per hour by 2024.

Labour pledges to introduce a £10 minimum wage in 2020 for all employees aged 16 and over.