September 1, 2019 by Joshua Marshall No Comments 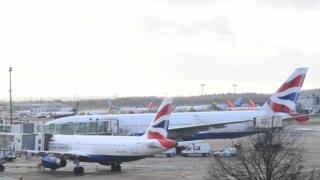 Some flights to and from the UK are facing delays and cancellations due to problems affecting French airspace.

EasyJet said it was experiencing disruption due to a “partial failure of French air traffic control systems”.

Paris Airport tweeted that a “national computer failure related to the centralisation of flight plans” on Sunday morning was now resolved.

But it warned that delays were still expected.

National Air Traffic Services (NATS) said it does not know how many flights have been affected but it is working with airlines in the UK to try to minimise disruption.

Gatwick Airport said passengers should check with airlines on the status of their flights before heading to the airport.

EasyJet said it has been forced to cancel 94 flights out of just under 2,000 scheduled to take off on Sunday.

Affected passengers were contacted directly and given the option of transferring their flight for free or receiving a refund, it said.

The airline added it was seeing significant delays and recommended all its passengers, regardless of their destination, check the status of their flight at www.easyjet.com/en/flight-tracker for real time information before going to the airport.

British Airways also urged customers to check the status of their flights online and said it expects disruption to services to France and Spain, as well as those which fly over these countries on the way to other destinations.

Some passengers told the BBC their British Airways flights had been cancelled.

The airline said any affected customers had been notified directly.

It said it would offer flexible rebooking options for anyone who wants to change their dates of travel as a result of the disruption.

Ryanair advised customers on its website there had been a “serious French ATC [air traffic control] equipment failure” early on Sunday morning.

It said delays of “up to three hours are being suffered”.

Travel expert Simon Calder said: “France is absolutely at the heart of European air traffic control – some 60% of all EasyJet flights to anywhere go over French territory.

“This appears to be some kind of malfunction which has greatly reduced the flow rate [of flights] so there’s reports of pilots in Lisbon, for example, trying to get to the UK telling passengers we could be five hours late.”

He said affected passengers will not be eligible for compensation, explaining: “It’s not the airlines’ fault.”

But he said the airlines have a strict duty of care, which means they must provide meals and if necessary accommodation to passengers.

He added: “They also have to rebook you on the first available flight, ideally on the same day, even if it means paying money to a rival to get you home.”

The disruption is having a wider knock-on effect in the UK, with some flights from Scotland to England cancelled.

Richard Martin was due to fly from Edinburgh to London Stansted when EasyJet texted to say his flight had been cancelled.

“We are booked on another flight tomorrow but I’m due to be back at work,” he said.

“The queues at the airport and everything are crazy and we’ve had some family members say something similar has also happened to them.”

Have you been affected by the delays? Share your experiences by emailing haveyoursay@bbc.co.uk.