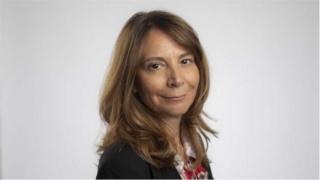 The Financial Times has named its first female editor since it was founded in 1884.

Roula Khalaf will take over from Lionel Barber, who announced on Tuesday that he would leave in January after 34 years at the pink-coloured financial newspaper.

Ms Khalaf, his deputy, said she was “thrilled” to be running “the greatest news organisation in the world”.

The FT was sold to Japanese media firm Nikkei in 2015 by publisher Pearson.

Tsuneo Kita, chairman of Nikkei, said: “I have full confidence that she will continue the FT’s mission to deliver quality journalism without fear and without favour.”

Ms Khalaf has been with the FT for 24 years. Her roles have included running its Middle East coverage during the Iraq war and the 2011 Arab Spring.

She has been the deputy editor since 2016, overseeing strategic planning and the launch of “Trade Secrets”, which covers global trade.

Mr Barber said he was leaving “the best job in journalism” after a 14-year tenure and 34 years at the paper.

After 14 years, I am stepping down as editor in the New Year. It has been a rare privilege and a great pleasure to hold the best job in journalism. Full statement to follow @FinancialTimes

He is the longest-serving UK national newspaper editor and led a push into online subscription that is regarded as having helped the business during a period when traditional newspaper sales have been falling.

“When I took over as editor, I pledged to restore the gold standard in the FT’s reporting and commentary and to help the board build a sustainably profitable business,” Mr Barber said.

Mr Kita said he had “strong personal trust” in Mr Barber. “It’s very sad to see him leave the FT. However, both of us agree it is time to open a new chapter,” he said.

The FT’s print circulation is about 166,000 a day. In April, it said it had achieved one million paying readers, including digital subscribers.