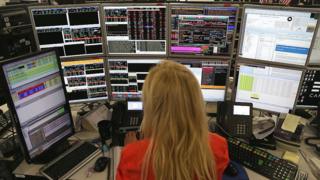 The FTSE 100 has seen its biggest fall in over three-and-a-half years.

The blue-chip index dropped over 3%, marking its worst day since January 2016. European and US stock markets also slid amid a global sell-off.

The falls came after poor US jobs and manufacturing figures and a World Trade Organization decision paving the way for $7.5bn in US tariffs on EU goods.

Analysts said these factors had sparked concern over the strength of the global economy.

On Tuesday, one of the most closely-watched US manufacturing figures, the Institute for Supply Management’s (ISM) index of factory activity, dropped to its lowest level since June 2009.

Fresh figures on Wednesday showing a slowdown in jobs growth in the private sector in September accelerated concerns over the US economy.

“Given that most other areas in the world aren’t covering themselves in economic glory, the fact that the US is having a volatile time makes people a little worried,” said Ben Kumar, an analyst at Seven Investment Management.

“It’s all adding up to the same thing essentially: worries that the global economy is slowing and giving investors reason to pause and take profits,” he said.

In the US, in afternoon trading, the three main indexes were all trading around 2% lower.

But Mr Kumar said it was too early to be concerned.

“It’s hard to tell anything from a one day perspective.

“People have overreacted which does tend to happen. We’re in this world where everyone freaks out first and asks questions later.

“It’s just one of those days where lots of things go wrong at the same time.”