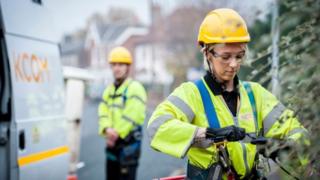 Hull has become the first city in the UK where everyone can get full fibre broadband.

This achievement has come after a seven year investment programme – and the fact that this city has led the way in developing this vital technology tells us an interesting story about the UK’s broadband strategy.

Full fibre, where a fibre optic cable comes right into your home rather than to a streetside cabinet, is the gold standard of broadband, available to only 8% of UK premises.

We lag far behind many of our European neighbours, a fact which has dismayed the Prime Minister.

Boris Johnson has promised that everyone in the UK will have access to this ultrafast service by 2025.

That is a pledge that has left the internet industry and BT in particular with a mountain to climb – quite literally in some parts of the country.

It was not BT which laid fibre down every street to reach 200,000 homes in Hull and East Yorkshire but the local telecoms firm Kcom.

Once owned by the city council and known as Kingston Communications, this business was briefly part of the dot com bubble.

Back in 1999 the company, known back then for its distinctive white phone boxes, floated on the stock exchange.

For a while, its shares soared and it entered the FTSE 100, leaving many local residents sitting on big paper profits.

When the bubble burst, the shares collapsed and a challenging decade followed.

But in 2012 the company now known as Kcom decided on an ambitious plan.

Back then, BT had started to roll out fibre to the cabinet (FTTC), where the final connection to homes came down a copper cable.

“We decided that was just not future proof, copper wasn’t suitable for the fast data rates of the future,” explains Sean Royce, now Kcom’s managing director.

FTTC was a cheaper option – one cabinet could serve a thousand residents – but Kcom decided to gamble on laying fibre to every home.

For a while, the £85m investment programme looked like a gamble that had failed.

Because it took much longer to roll out this kind of network, Hull kept coming at or near the bottom of the league for broadband speeds, and many residents complained..

Now though, it has soared to the top of the league. “We said ‘Give us time,” says Sean Royce. “And now here we are with the fastest network in the UK.”

Indeed, he says proudly, with average speeds of 94.7Mbps, Hull would be the fastest country in the world if it was a republic.

He says the benefits of full fibre are already being felt, with £469m of incremental economic activity in the area that would not have happened without it.

So did BT go down the wrong path? Well, given that Kcom has spent £85m to reach 0.5% of UK premises, the figure for a nationwide rollout would be at least £17bn.

BT will argue that if it had proposed that scale of investment plan back in 2012 its shareholders would have given it a dusty answer.

Then there is the question of government incentives.

In the early years of the Cameron administration, then culture secretary Jeremy Hunt set a target of getting the “best superfast broadband” in Europe to 90% of homes by 2015.

With superfast defined as above 24Mbps, it was obvious to BT that there were much cheaper and faster ways of achieving this goal than investing in full fibre.

Successive governments and regulators have wanted three things from the broadband industry – the fastest speeds, delivered to the most people, in a competitive market where prices are kept low.

Kcom’s success as a monopoly player in Hull seems to suggest that you cannot have both world-leading speeds and fierce competition.

Now the industry is being set what many players think is a ludicrously ambitious new target.

BT boasted yesterday that it is hooking up one new customer to full fibre every 30 seconds – but Andrew Ferguson of thinkbroadband.com reckons hitting the PM’s target will mean a new connection being completed every 8 seconds.

BT and other industry players are telling the government that they will need less regulation, lower taxes, and probably a looser competition framework if they are to give everyone the full fibre nirvana available to the residents of Hull.