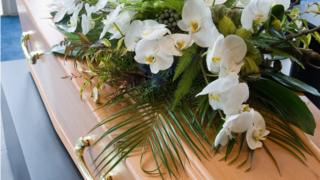 The average cost of a basic funeral has risen by more than 9% in a year in some regions, an insurer has suggested.

The typical cost was now £4,417, up 3.4% on a year ago, but burial fees have led to large rises in some areas, research by SunLife claimed.

Overall, it suggested the cost of dying, including professional fees and flowers, was now £9,493.

The Competition and Markets Authority (CMA) is conducting a full inquiry into the sector. The CMA had concerns that funeral directors found it easy to charge grieving families higher prices, and that those families found it hard to shop around.

Why are costs rising?

The insurer, which has been tracking these costs since 2004, said that the average cost of a basic burial had risen by 65% in the last decade. This had led, in part, to burials now accounting for less than a quarter of all funerals.

These costs varied widely across the country. London remained the most expensive at £5,963, but other areas had seen a much bigger annual increase.

Karen Hitchman, 56, from Mossley in Greater Manchester, told BBC News last year that when her parents died within six weeks of each other she had no savings to pay for their funerals.

“I actually felt suicidal, that’s how depressed I got with it all and the more people I asked for help, the more I got turned away,” she said.

Ms Hitchman eventually received help from the government and charities but said funeral costs in general were too high for those already struggling to make ends meet.

“Obviously when you’re in a state of shock and you’re dealing with a funeral, it’s the last thing you think of,” she said.

The associated costs of a funeral can add up. These may include the hire of limousines, the cost of flowers, a venue hire, catering and so on.

The funeral service itself – where Abide With Me remains the most popular piece of music to play – is one of the key costs, with burial the most expensive option.

As a result, some people are choosing what is called a direct cremation. This is a cremation with no funeral service. The remains are returned to loved ones to be kept or scattered, and they can throw a farewell ceremony at a later date.

The average cost of a direct cremation fell by 5% to £1,626 in the last year, SunLife said.

Ian Atkinson, from SunLife, said: “Some people do not like the thought of not having a service in a crematorium, thinking perhaps it is not a proper send-off, but this view is changing more and more.”

He said funeral directors could do more to advertise this option.

Tips when paying for a funeral in advance

In 2018, there was a price war after Co-op offered to beat the cost of ceremonies offered by rivals.

There is a state safety net, the Funeral Expenses Payment, available to people in England and Wales on certain benefits, but critics say it still leaves a shortfall that has to be picked up by families. It also operates in Northern Ireland, but is claimed differently.

There is a similar scheme in Scotland, known as the Funeral Support Payment.