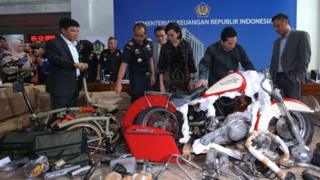 The boss of Indonesia’s national airline is being dismissed over allegations he smuggled a classic motorbike into the country.

Garuda’s chief executive Ari Askhara has been accused of failing to declare the importation of a Harley Davidson and two folding bikes.

It is a fresh blow to the firm, which has faced questions over its finances.

State-Owned Enterprises Minister Erick Thohir told a news conference that the items were brought into Indonesia from France.

“This process was done completely within a state-owned company, not only by an individual,” Mr Thohir added, according to Reuters.

He also said payment for the motorbike was made through a Garuda finance manager in Amsterdam.

The ministry would continue to investigate the matter, Mr Thohir said.

It was not clear when Mr Askhara, who took up his role as Garuda’s chief executive in September 2018, would be forced to leave his position.

The State-Owned Enterprises Ministry did not immediately respond to a BBC request for comment.

In June this year, the airline was ordered by the country’s financial watchdog to restate its financial results for 2018 over accounting errors.