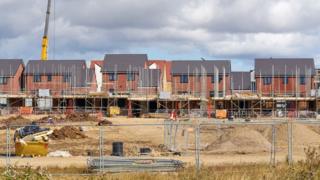 Labour’s manifesto includes a pledge to be building 100,000 council houses and at least 50,000 affordable homes through housing associations a year by the end of the Parliament.

Housing is devolved, so the party is talking about England only.

This is a properly large number of homes to be building. To put it into context, a combination of council housing, housing associations and the private sector has managed to produce more than 150,000 dwellings in total for only two of the past 10 years.

And since the early 1990s, only a very few years have seen more than one or two thousand council houses built.

But while local authorities tend not to be as involved in building houses as they once were, there are also homes not built by councils but still for social rent, of which 6,287 were built in 2018-19.

Labour, however, has been clear in its manifesto it is talking about homes “built by councils for social rent”.

And it defines social rent as being about half the cost of market rates.

Perhaps the biggest challenge would be finding people to build these houses.

The construction sector has been complaining about skills shortages for several years, so even diverting all the workers currently building homes for the private sector would not necessarily be enough.

“We can get people into these courses and get people on the ground being able to do the work,” she said.

Asked about who these people might be given unemployment is at relatively low levels (1.3 million in the most recent figures), she said many of those on zero-hours contracts or having to work several jobs would prefer to be retrained.

In 2017-18, there were 69,897 enrolments in further education courses in construction, planning and the built environment, while 44,570 people took part in apprenticeships in that area.

Labour is separately committed to creating one million “green” jobs, of which just under half would be used to transform existing homes, so a lot of workers would need to be retrained into these sorts of roles.

And on top of that, Labour is also committed to a big programme of infrastructure investment, covering things such as schools, hospitals and care homes, which would also require workers with construction skills.

It’s not just bricklayers, plasterers, carpenters, electricians and plumbers who would be needed – councils not currently geared up to large-scale housebuilding would also need to employ extra staff, as well as expanding their planning departments.

Some of the people with these skills could be attracted from overseas but any sort of Brexit that did not keep the UK as part of the single market would probably make it harder for employers to hire workers from the rest of Europe.

Labour has, however, given itself five years to be building 100,000 council houses and 50,000 housing association homes a year, which means there would be time to create the courses and get people trained to do the work, as well as preparing local authorities for the task.

There are also questions about whether enough land could be found to build all these new properties on but if the government was sufficiently committed to the programme (and had a big enough majority) it could change the planning rules.

There is not a specific costing for the housebuilding programme – it is part of Labour’s £150bn Social Transformation Fund.

So, there are significant challenges but if a Labour government spent the billions of pounds necessary to train workers, offered high enough wages to attract people to retrain and took the time and effort to push through the structural changes needed in local authorities and the planning system, this housebuilding target would not be impossible.

What claims do you want BBC Reality Check to investigate? Get in touch