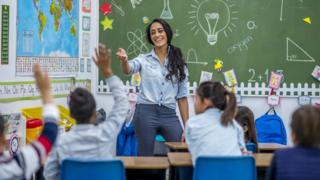 The Institute for Fiscal Studies (IFS) has been focusing on the spending pledges from the Conservative Party, Labour Party and Liberal Democrats’ manifestos.

Even before the general election was called, the government had already set out plans for day-to-day public spending to rise by £34bn a year by 2024.

So how much more do the parties intend to spend on top of these existing plans?

Compared to Labour and the Liberal Democrats, the Conservative Party has set out the most modest plans for spending, by some distance.

On top of existing government plans, the Conservatives are only offering an additional £2.9bn a year on day-to-day spending by 2024. Day-to-day spending is money that on goes wages and raw materials, like the cost of medicines and teachers’ salaries.

The single most expensive manifesto policy, coming in at £900m a year by 2024, is a plan to increase the number of NHS nurses in England by 50,000. Out of this figure, the Conservatives say that 18,500 can be found by using policies to ensure fewer nurses leave the NHS.

Day-to-day NHS spending in England would, under the Conservatives, increase by an average of 3.2% per year between now and 2024, the IFS says.

This is based on existing government plans to increase NHS spending by £20.5bn a year by 2024 (once adjusted for inflation). This particular spending commitment was announced before the election was called – so it is not costed in the manifesto.

The IFS says the Conservatives’ overall £2.9bn additional spending pledge would leave spending on public services, apart from health, about 15% lower than it was at the start of the 2010s, once adjusted for inflation.

As well as day-to-day spending, there is also spending on investment. This is money that goes on long-term things, like roads, bridges, school buildings and equipment.

The Conservatives want an extra £8.1bn of investment spending, on top of current plans, by 2024.

According to the IFS, this would be 15% higher than the £53.8bn pencilled in at the time of the last Budget. If delivered, it would be worth 2.4% of national income, higher than has been sustained at any point in the last 40 years.

However, this is still smaller than the Labour and Lib Dems’ proposals.

Overall, the Conservatives are not intending to spend much more than what they have previously set out in government.

But they argue that their spending plans are responsible and fully-costed.

The Conservatives’ plans will not change the overall tax take much: there will be modest reductions in National Insurance for individuals, but corporation tax cuts have been postponed.

The Labour Party has the most ambitious spending plan by far. By 2024, it would spend an additional £98bn a year on day-to-day expenditure, according to IFS analysis.

Social care is the most expensive single Labour pledge, with £10.8bn being spent per year by 2024 to provide free personal care for over-65s in England. Another big ticket item is the cost of abolishing tuition fees and restoring maintenance grants, coming in at a net cost of £7.2bn by 2024.

Since the publication of its manifesto, Labour has also announced a compensation package to women who lost out to changes in the state pension.

Labour has said its promise may cost £58bn – a figure which the IFS has since factored into its analysis, on the basis it is paid over four years.

Paul Johnson, director of the IFS, told the BBC the compensation pledge “drives a coach and horses” through Labour’s manifesto pledge to achieve a current budget surplus.

That is when the amount of government revenue coming in matches the amount going on day-to-day spending.

Labour wants to increase spending on NHS England by an average of 3.8% a year, which is more generous than the Conservative Party.

Labour would also double the level of spending on free childcare, the IFS says.

According to the IFS analysis, Labour would also increase investment spending by £55bn a year, doubling current levels and substantially more than the Conservatives’ offering. This includes the party’s nationalisation plans on areas such as broadband.

If Labour’s plans are realised, overall spending would rise to a peacetime high.

However, there is a question over whether such large sums of public sector spending could be ramped up so quickly. For example, are there enough people available to immediately start working on new investment projects?

Labour plans the largest tax increases of all three parties. They are aimed at corporations and the wealthiest, although there has been debate about whether the burden will hit more than just the top 5% of earners.

The Liberal Democrats have focused on childcare as their main area of spending. According to their own costings, they plan to spend an extra £13bn to provide free childcare in England by 2024. This would be more than four-and-a-half times higher than current plans.

Overall, the party plans to spend an additional £33bn on day-to-day expenditure by 2025 – more than the Conservatives, but less than Labour.

The Liberal Democrats have proposed an average increase of 3.7% a year on day-to-day NHS spending in England – similar to Labour’s pledge and more than the Conservatives.

Like the other two parties, the Lib Dems have also pledged a big increase in investment spending – an extra £26bn a year. Again, this places the party in-between the Conservative and Labour offerings.

The Liberal Democrats will raise money by taxing income, frequent flyers and corporations. They say the rest of the cost will be met from the financial benefits of cancelling Brexit.

Compared with Labour and the Conservatives plans, the IFS say the Lib Dems are the only party which would “put debt on a decisively downward path”.

What do the other parties offer?