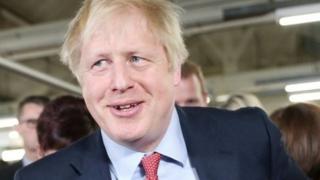 Boris Johnson has insisted there will not be any checks for goods travelling between Northern Ireland and Great Britain under his Brexit deal.

He told Sky News that a leaked Treasury analysis document Labour revealed on Friday was “wrong” to suggest this would be the case.

The PM said the report had been put out “as a kind of distraction”.

But Labour said it was “hard evidence” NI would be “symbolically separated” from the rest of the UK after Brexit.

And DUP leader Arlene Foster said she still had concerns over the prime minister’s withdrawal agreement.

The comments come as the main political party leaders continue to push their pledges ahead of Thursday’s general election.

Under the PM’s agreement, Northern Ireland would continue to follow many EU rules on food and manufactured goods, while the rest of the UK would not.

Northern Ireland would also continue to follow EU customs rules but would remain part of the UK’s customs territory.

A government risk assessment published in October said it would lead to new administration and checks on goods from west to east.

But Mr Johnson has insisted Northern Irish businesses will not be hit with additional paperwork or fees, telling a BBC phone-in during the election campaign: “We will make sure that businesses face no extra costs and no checks for stuff being exported from NI to GB.”

He has said the only checks would be on British exports to the Republic of Ireland going via Northern Ireland.

When asked on Sky News’s Sophy Ridge on Sunday whether there would be checks, in light of the leaked Treasury document, Mr Johnson replied: “No, absolutely not.

“The deal we’ve done with the EU is a brilliant deal and it allows us to do all the things that Brexit was about, so it’s about taking back control of our borders, money, laws.

“But unlike the previous arrangements, it allows the whole of the UK to come out of the EU, including Northern Ireland, and the only checks that there would be would be if something was coming from GB via Northern Ireland and was going on to the Republic, then there might be checks at the border into Northern Ireland.”

Asked if the government’s document and impact assessment was therefore wrong, Mr Johnson replied: “Yes. Because there’s no question of there being checks on goods going NI-GB or GB-NI because they are part of – if you look at what the deal is, we’re part of the same customs territory and it’s very clear that there should be unfettered access between Northern Ireland and the rest of GB.

“The only reason – this is another of these things that has been produced by the Labour Party as a kind of distraction.”

Northern Ireland will continue to follow many rules of the EU’s single market for goods.

And it will leave the EU customs union with the rest of the UK, but will continue to apply EU customs rules on goods arriving at its ports.

This will mean new checks on goods arriving here from GB.

The prime minister suggested these new checks would only apply to goods destined to end up in the Republic.

Those comments do not accurately reflect what is in the deal. For some goods, particularly food, EU law requires checks at the point of entry into the single market.

As Northern Ireland will effectively be in the single market those products will have to be checked even if they are not going on to the Republic.

DUP leader Ms Foster told BBC 5 live’s Pienaar’s Politics her party had a “large concern” about how it would be determined which goods travelling through Northern Ireland had the Republic of Ireland as the final destination.

“By definition you would need checks to see that that happens,” she said. “There have been differing views even within the Conservative Party as to what it meant.”

Ms Foster said there had to be “clarity in relation to that for us those of us living in Northern Ireland, because, of course, Great Britain is our largest market by far, and we need to be able to, from an economic point of view, know what it’s going to mean for us in the future”.

At a press conference in London on Friday, Labour leader Jeremy Corbyn said the 15-page Treasury document – entitled Northern Ireland Protocol: Unfettered Access to the UK Internal Market – disproved Mr Johnson’s claims there would be no checks, and showed his claims about his own deal were “fraudulent”.

“What we have here is a confidential report by Johnson’s own government, marked official, sensitive, that exposes the falsehoods that Boris Johnson has been putting forward,” he said.

“This is cold, hard evidence that categorically shows the impact a damaging Brexit deal would have on large parts of our country, 15 pages that paint a damning picture of Johnson’s deal on the issue of Northern Ireland in particular.”