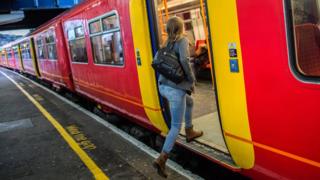 Train ticket sales could be transformed under Labour plans for a central online booking portal.

The party wants to replace what it sees as a confusing system of sales by private train operators – with around 55 million types of fare available.

Instead, it is proposing a “one-stop shop” for fares with no booking fees if it wins the election on 12 December.

The proposal is part of broader plans by the party to nationalise the UK’s train system.

Labour says nationalisation – which it plans to achieve within five years of coming to power – will allow fares to be capped and improve the reliability of services.

The plan to introduce a ticketing service to simplify rail ticket sales could create a competitor to existing third party ticket sellers such as Trainline, which floated on the London Stock Exchange in June.

Labour says passengers can already buy tickets directly from train companies, and that nationalisation would just simplify the process.

Its regional manifestos contain a number of transport pledges to be paid for by a £250bn Green Transformation Fund – a pot of money raised through borrowing – such as:

The price of rail tickets is set to rise by an average of 2.7% from 2 January, industry body the Rail Delivery Group announced this week.

A spokesperson said: “While apps and websites perform a useful function, they are limited by only being able to offer the same confusing and sometimes contradictory range of fares as today, because these were baked in to the system in the mid-1990s.

Independent watchdog Transport Focus said a majority of rail users did not feel they were getting value for money.

The Conservatives are promising to improve transport links as part of a £3.6bn Towns Fund.

They have also promised to give more funding to local combined authorities to improve bus and train services and put £500m into reversing cuts to the railway network made in the 1960s.

The Liberal Democrats have also made pledges on transport, promising to freeze peak time and season ticket train fares, and to complete the HS2 rail project. The SNP want more powers devolved to Scotland, including on transport.

The Brexit Party’s flagship transport policy is scrapping the HS2 high-speed rail link – a goal it shares with the Green Party.