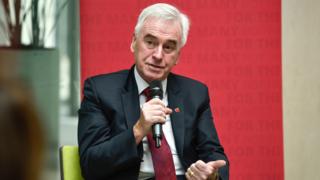 Labour has promised an “irreversible shift” of power and investment to working people outside the south-east of England, if they win the election.

John McDonnell will pledge £150bn for schools, hospitals and housing on top of existing spending plans to be paid for through borrowing.

The shadow chancellor says he will move Treasury staff out of London to ensure the regions get a fair share of it.

Mr Javid will set out Conservative plans to invest in education, technology, and infrastructure in a speech later.

Speaking in Liverpool, Mr McDonnell will also promise to set up a Treasury unit in the north of England to make spending decisions away from Whitehall.

She cited school and hospital refurbishments as examples of “shovel-ready” projects that could be undertaken in the “early days” of a future Labour government.

Longer-term expenditure, she added, should be driven by “an understanding of what needs to be done in each region”.

However, the Conservatives have said that the spending figures to be announced by Mr McDonnell do not add up.

At a speech in Manchester later, Chancellor Sajid Javid is expected to say Mr Corbyn and Mr McDonnell are “like the anti-vaxxers of economic policy”.

“Not only did they reject the treatment needed to heal our economy and get the deficit down by four-fifths, they now want to take every step imaginable to make the country sick and unhealthy again.

“There are serious consequences to these fantasy economics,” he will say.

Mr Javid will set out plans to invest in education, technology, and infrastructure to help “unleash Britain’s potential” – but he will argue that the most important thing for the economy is to deliver Brexit.

“Jeremy Corbyn’s Labour would damage our economy by wasting 2020 having another two referendums on EU membership and Scottish independence – leaving business facing even more uncertainty,” the chancellor will add.

Could a Labour government spend this much?

These investment plans are so big that some experts wonder whether a Labour government could actually commission projects at the rate required to get the cash spent.

Taking social and green spending together gets you to an average figure of £55bn a year in new money.

That is nearly £5bn extra a month, a number that represents more than double current levels of investment.

But major projects can take years to get under way.

So Labour ministers might find themselves promising better schools and hospitals but fall frustratingly behind on delivery.

If they were to manage it, would they be able to keep the debt under control?

The strategy is to pay for all this by borrowing, not taxing.

Labour believes the investment would make the UK more productive, that a faster-growing economy can afford to borrow more.

At the 2017 general election, Labour announced plans to set up a national transformation fund to overhaul the UK’s transport links and infrastructure.

This includes a social transformation fund, which Mr McDonnell said would now get an extra £100bn, providing a £150bn pot to be spent over the next five years.

The fund will be used to “upgrade and expand our schools, hospitals, care homes and council houses”, he will say in his speech.

A further £250bn of investment will be spent across the country through the Green Transformation Fund.

Mr McDonnell and Labour leader Jeremy Corbyn will also use their trip to north-west England to unveil Labour’s campaign bus, with the election message: “It’s time for real change.”

Mr Corbyn plans to host a rally in Manchester in the evening and will travel on the bus as the party targets “dozens” of marginal constituencies in the coming five weeks.

Ahead of both speeches, the Express and Star newspaper revealed that former Labour MP Ian Austin would be standing down at the election, expressing his criticism of the Labour leadership and calling on voters to back Prime Minister Boris Johnson in the poll.

Speaking on BBC Radio 4’s Today programme, Mr Austin said that after 34 years in the Labour Party, it “has really come to something when I tell traditional Labour voters they should be voting for Boris Johnson at this election”.

His comments follow deputy leader Tom Watson’s decision to stand down from his role, citing “personal, not political” reasons.

However Mr Austin, the former MP for Dudley North who resigned from the party in February, suggested otherwise, saying: “If Tom thought that Jeremy Corbyn was fit to lead our country and fit to form a government, then he would have been in that cabinet. Would he really be standing down?”

In response, Rebecca Long-Bailey told Today it was “pretty clear” that Mr Austin “doesn’t like Jeremy”, and had disagreed with him over policy.

“But certainly, voting for Boris Johnson, if you’re a Labour voter and you want to protect your community – it’s absolutely absurd and it makes no sense at all,” she added.

Spending on regional development looks set to be a key election battleground, as the Conservatives target Labour-held seats in the Midlands and north of England.

Mr Johnson has promised to give the north of England more control over its railways, greater powers for some elected mayors and a new economic development body.

What question do you have about the general election?

In some cases your question will be published, displaying your name, location and age as you provide it, unless you state otherwise. Your contact details will never be published. Please ensure you have read the terms and conditions.

Use this form to ask your question or get in touch using #BBCYourQuestions:

If you are reading this page and can’t see the form you will need to visit the mobile version of the BBC website to submit your question.