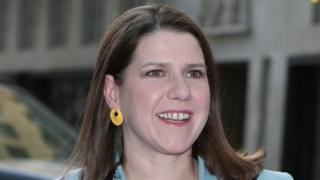 The Lib Dems would not support Labour’s plans to renationalise key industries in the event of a hung Parliament, the party’s leader Jo Swinson has said.

She told the BBC Radio 5’s Pienaar’s Politics the policy was a “distraction” and not “the way forward”.

The Lib Dems and Labour have both ruled out a coalition deal if there is no clear general election winner.

Asked if she would try to block Labour from forming a minority government, she said it was a “fantasy situation”.

“Nobody is expecting, on the current scenario, that Jeremy Corbyn is getting anywhere near Downing Street and the Liberal Democrats are going to put him there.

“So the Labour manifesto, it’s a wish list, they cannot deliver it.”

Ms Swinson, who was a business minister in the Conservative/Lib Dem coalition government, began the general election campaign by saying she was aiming to be the prime minister of a Liberal Democrat government but has since conceded that would be a “big step” given the opinion polls.

If her party ends up holding the balance of power after 12 December’s election, she has said her MPs would not actively support a Labour or Tory programme of government as she believes neither Jeremy Corbyn nor Boris Johnson are fit to be prime minister.

The party’s foreign affairs spokesman Chuka Umunna refused to speculate about what his party would do in this situation, in an interview with the BBC’s Andrew Marr.

Jo Swinson has not ruled out allowing a Conservative or Labour leader to take office – by abstaining in a vote on their first Queen’s Speech – if they agreed to hold another EU referendum.

Labour is committed to holding another EU referendum, on a renegotiated deal with the EU.

But the party’s first Queen’s Speech would be likely to include plans to take the Royal Mail, rail companies, energy supply networks, water and sewerage companies back into public ownership.

Asked whether she would support Labour’s plans, Ms Swinson told Pienaar’s Politics: “No, I think renationalisation is a distraction.

“I don’t think it’s a way to deliver better public services and I think it’s taking us away from, actually, how do you make things better for people?”

She accused the prime minister of trying to make Friday’s terror attack an election issue.

“This was an opportunity for Boris Johnson to be a statesman, and yet again he has failed in that and has just shown why he is not fit for the job of Prime Minister,” she said.

“You’ve got a community which is coming together in a brilliant way and straight out of the door the prime minister’s trying to make it an election issue – I just think it’s pretty distasteful.

“I think we ought to be able to behave with respect, even when these things happen in the middle of a general election campaign.”