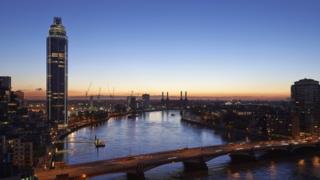 Foreigners buying properties in England will be forced to pay 3% more in stamp duty than UK residents, if the Conservatives win the general election.

The party claim it will help people get on the housing ladder by taking the heat out of the property market.

The government was already planning a 1% hike for foreign buyers.

Labour is also proposing a levy on “overseas companies buying housing”, and wants to give local people “first dibs” on homes built in their area.

Currently, foreign individuals and companies can buy homes as easily as UK residents – but there are longstanding concerns about properties being bought as investments and standing empty, particularly in upmarket areas of London.

The Conservatives quote a study saying 13% of homes in London were bought by overseas buyers between 2014 and 2016.

Research last year by the King’s College Business School suggested foreign buyers did not just push up prices at the high-end of the property market, but there was a “trickle down” effect to less expensive properties, and that cities outside London also felt the effect.

The Conservative government announced a consultation for a 1% levy on stamp duty for buyers who are not tax resident in the UK in February.

But a study for Labour’s London Mayor Sadiq Khan said the figure was not high enough, pointing to other cities with large numbers of foreign buyers – such as Vancouver and Singapore, which both have a 20% surcharge.

The Conservatives are now proposing a surcharge of 3%, to be paid in addition to all other stamp duty charges.

They estimate the measure will affect about 70,000 transactions a year, raising £120m, which the party would direct at programmes tackling rough sleeping.

When he was London mayor, Boris Johnson said it would be wrong to “slam the door on the right of overseas residents to buy homes in London – notwithstanding the effect they may have in some parts of prime London on the market”.

He said the UK would “always be open to people coming to live, work, and build a life in this great country”, adding: “The steps we are taking will ensure that more people have the opportunity of a great place to live and build a family.”

“Rough sleeping has been rising for the last decade and frontline services need all the support they can get to help tackle this mounting issue,” she said.

“At the same time, however, we can’t solve homelessness without tackling the root of the housing crisis, and that means an investment in the social homes we so desperately need.

“We want the next government to deliver at least 90,000 new social homes a year over the next parliament to help end this emergency.”

The main parties have set out competing proposals to address the UK’s housing shortage, ahead of 12 December’s general election.

Labour said it would embark on the biggest house-building programme since the 1960s, including 100,00 new council houses a year by 2024.

The Conservatives announced measures to help first-time buyers and boost private house building, promising a million homes over the next five years.

The Lib Dems set out plans for 300,000 new properties a year – a third of which would be social rented homes.

The party also said it would also tackle “wasted vacant housing stock” by allowing local authorities to increase council tax by up to 500% where homes are left empty for more than six months.

They also want to launch a rent-to-own scheme, which would see social tenants build up an equity stake in their homes over 30 years.