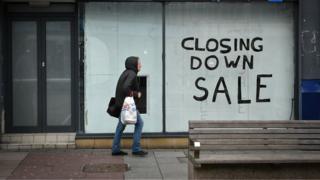 The Conservatives have pledged to reduce business rates for small firms in a bid to help “left- behind” towns, if they win the general election.

Under their plans, they would also extend discounts on business rates to smaller cinemas and music venues.

They are also offering to make it easier for local groups to buy community buildings such as post offices.

But Labour said the Tories had destroyed High Streets and towns.

Boris Johnson said the package of measures would help “overlooked and left-behind” towns, and help people “put the heart back into the places they call home”.

The Conservatives are battling with opposition parties for votes in marginal constituencies ahead of the 12 December general election.

The party said that, if re-elected, it would increase the business rate discount available to smaller firms from 33% to 50% in 2020/21.

They are also planning to introduce a new £1,000 business rates relief scheme for pubs, which the party says amounts to an £18m tax cut next year.

The changes to business rates would only apply to England. Business rates for Wales are set in Westminster but relief is set by the Welsh government.

If you want to make a retailer’s blood boil, just say the words “business rates” and it usually does the trick.

Many see the tax as an extra burden on them based on the size and value of their properties, no matter how well their businesses are doing.

That feels tough when so many are already struggling to compete against competitors online.

But if retailers were hoping to see some big changes or radical overhauls, they’ll be disappointed.

These promises from the Conservative party will be welcomed by those who would benefit – the smallest retailers, independent cinemas, and little local pubs.

But they are relatively cheap give-aways, skirting round the edges of a tax which raised £31bn last year.

Just two weeks ago the Treasury select committee released a report into what they described as the “broken” and “unfair” rates system.

They challenged the government to take a serious look at alternative systems, which it seems the Conservatives are quietly side-stepping in this election.

The Conservatives are also pledging to give community groups up to nine months – up from the current six – to buy buildings listed as ‘assets of community value’.

The groups will also be able to apply for cash from a £150m fund for helping with making bids for the designated buildings, such as post offices and pubs.

The party has also promised £500m to reverse cuts to the railway network made in the 1960s by Dr Richard Beeching, which affected smaller towns and villages, and a £350m fund for improving cycling infrastructure.

Making the announcements, Mr Johnson said: “For too long, too many towns and villages across Britain have been overlooked and left behind.

“When the UK voted to leave the EU in 2016, many communities felt their voices had been heard for the first time in decades and their lives would improve.

“We will invest in these communities and help people put the heart back into the places they call home.

“We need to get Brexit done so that we can unleash the potential of all our towns, cities and villages.

“We will be able to save our High Streets, keep pubs and post offices open and re-connect places to the rail network half a century after they were cut off.”

But Labour highlighted cuts to local councils, which the party said had hit the most deprived areas particularly hard.

Shadow communities secretary Andrew Gwynne said: “A decade of vicious cuts to the services that people in our communities rely on has taken 60p in every £1 from council budgets.”

“There is a clear choice in this election on 12 December: more of the same with Boris Johnson’s Tories or real change and investment under Labour.”