General election 2019: What is Labour offering to Waspi women? 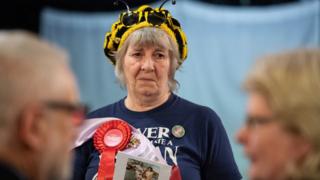 Labour has announced a policy to compensate some of the women who lost out as a result of changes to the pension age.

The campaign for compensation has been led by the group Women Against State Pension Inequality (Waspi).

Labour’s Angela Rayner told BBC News: “The government failed the women who were born in the 1950s. They stole their pension.”

Labour has produced a calculator for affected people to check how much compensation they could receive.

Labour says the policy would cost about £58bn, paid in instalments over five years.

But it disputed suggestions that this would prevent it meeting its fiscal rule that it would only borrow money to invest, despite not having said where the money would come from.

Labour’s John Healey told BBC News: “This is not normal government spending – it’s not a regular spending commitment – that’s why it wasn’t costed as part of our grey book exercise.”

The grey book is the document Labour released alongside the manifesto that has costings for all day-to-day spending.

“Just as government always has a contingency fund or a system of funding… one-off spending, which can’t be built and shouldn’t be built into regular budgets,” he said.

Nonetheless, it is clearly going to have to be funded either through borrowing or taxation and it will push up current spending.

While governments do have contingency funds to pay for things like emergency responses, £58bn would be an unusually large payment, and it would be hard to describe the payments as a contingency when the party has decided in advance to make them.

What claims do you want BBC Reality Check to investigate? Get in touch