General election 2019: Workers under Labour ‘will take back control’ 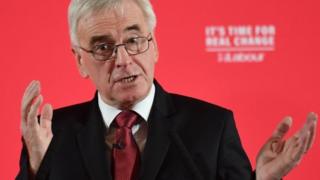 Shadow chancellor John McDonnell has said workers and consumers would “take back control” under a new business model if Labour wins the election.

In a speech in Westminster, he said company boards would include workers and elected members, giving them greater influence over pay structure.

And public sector chief executives would not be allowed to earn more than 20 times someone on the living wage.

The plans were part of an overall vision to create a business model that was not based on the “unfettered pursuit of profit maximisation”.

He said the relentless pursuit of shareholder value and “corporate greed” had been to the detriment of the workers who create that wealth.

“Labour’s reforms to how our large businesses and public utilities are governed, owned and regulated and how both workers and consumers are represented will genuinely enable them to take back control,” he said.

Earlier, Mr McDonnell confirmed on BBC Radio 4’s Today programme that Labour was retaining its policy to scrap student tuition fees as a start to overhauling the system of financing tertiary education, including student loans.

He added that there “is an approach that has to be taken that looks at existing debt”.

The government “must realise that the system is falling apart”, saying: “Large amounts of that debt is not being paid off.”