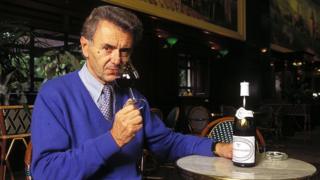 Georges Duboeuf applied traditional methods of winemaking to his craft

Georges Duboeuf, one of the great wine merchants of the 20th Century, has died at the age of 86.

He was best known for turning the release a little-known French product – an ordinary red wine called Beaujolais Nouveau – into a global phenomenon.

By the 1980s, Mr Duboeuf’s enthusiastic promotion of the wine had led to its monthly release date being known across the world as Beaujolais Nouveau Day.

It also earned him the nickname “the Pope of Beaujolais”.

Mr Duboeuf died of a stroke at about 18:00 (17:00 GMT) on Saturday at his home in the eastern village of Romanèche-Thorins, his daughter-in-law Anne told AFP news agency.

In the 1950s Mr Duboeuf set up L’Écrin Mâconnais-Beaujolais, an association of wine producers, to help promote local wines. Through the association, he developed strong relationships with traders and restaurateurs across the region.

He then opened his own winery, Georges Duboeuf Wines, in 1964. He applied traditional methods of winemaking to his craft, including rigorous monitoring of the wine and an apparently almost clinical dedication to hygiene.

The winery later grew to other regions, and in 1993 Mr Duboeuf set up a shop and museum of winemaking in Romanèche-Thorins.

But it was his tireless promotion of Beaujolais Nouveau in particular that set Mr Duboeuf apart.

Duboeuf, pictured in Romanèche-Thorins in 2010, was a tireless ambassador for Beaujolais Nouveau

Throughout the 1980s he held Beaujolais Nouveau festivals which were attended by celebrities of all kinds, including Michelin-starred restaurateurs.

By the time he passed the company on to his son Franck in 2018, the company was producing about 30 million bottles a year that were sold internationally.

Dominique Piron, president of the Inter Beaujolais company, said Mr Duboeuf was responsible for “raising the Beaujolais flag all over the world”.

“He had a nose, an intuition, [he was] a step ahead of everyone,” he said.