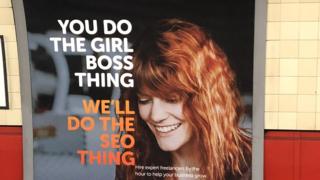 An advert saying “You do the girl boss thing” has been banned by the Advertising Standards Authority (ASA).

People Per Hour, an online platform that connects businesses and freelancers, ran the advert on the London Underground last year.

The ASA upheld 19 complaints it received about the advert and ruled that it reinforced “harmful gender stereotypes”.

The firm removed the word “girl” from the advert and issued an apology.

The offending advert received complaints for taking a patronising approach to a woman running a business.

The ASA said the phrase “We’ll do the SEO thing”, referring to internet search engine optimisation, also implied that women were not skilled at using technology.

People Per Hour admitted that the advert might “come across as sexist and demeaning to women”, but said it had taken steps to rectify this by removing the word “girl” from the advert and issuing an apology on its website.

The launch of the poster advertising campaign in November also saw some backlash on social media.

Emma Sexton, chief executive officer of a creative agency, called it “patronising” at the time.

Another Twitter user said that the advert “diminishes women” and added: “With attitudes like this, it is no wonder the already low number of women in top boardroom positions fell even further last year.”

People Per Hour also said the phrase “girl boss” was a reference to a book and a professional network.

US businesswoman Sophia Amoruso is widely credited with popularising the term “girl boss”, after she used it as the title of her book about transforming her eBay store into fashion brand Nasty Gal.

The book reached the best-seller list of the New York Times.

On Wednesday, the ASA also upheld complaints about a television advert for computer firm PC Specialist.

Eight viewers complained that it implied only men were interested in technology and computers.

The ban on adverts featuring “harmful gender stereotypes” came into force in June 2019.

Television adverts from US food giant Mondelez and German carmaker Volkswagen were the first to be banned under the new rules.

The other showed men being adventurous as a woman sat by a pram.

The UK’s advertising watchdog introduced the ban because it found some portrayals could play a part in “limiting people’s potential”.

It followed a review of gender stereotyping in adverts by the ASA.

It found evidence suggesting that harmful stereotypes could “restrict the choices, aspirations and opportunities of children, young people and adults”, while those stereotypes could be “reinforced by some advertising, which plays a part in unequal gender outcomes”.