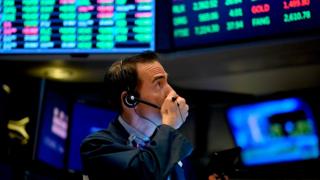 It also says leading economies should be prepared for co-ordinated use of government finances if there is a severe downturn.

Countries that can afford to, the IMF says, should use tax and spending measures to boost economic activity.

The IMF has already warned this week of weakening economic performance and risks to the outlook.

Central banks trying to combat economic weakness – which the IMF blames to a substantial extent on trade tensions – and persistently low inflation have cut interest rates and taken other steps to provide some stimulus.

The IMF’s economists welcome these moves, but there is also a warning that they have come at a cost:

“They encourage investors to take more chances in a quest for higher returns, so risks to financial stability and growth remain high in the medium term,” the Fund says.

Low borrowing costs have led companies to borrow more and their ability to keep up the debt payments is weakening.

The IMF looked at the possible consequences of an economic slowdown, half as severe as the financial crisis a decade ago. The result is sobering, IMF officials say.

A total of $19 trillion of debt would be owed by firms that could not cover interest costs from their earnings.

That is almost 40% of corporate debt in the economies concerned, which include the US, China and some European economies.

In addition, the ultra-low interest rates have encouraged investors such as pension funds and insurance companies to seek riskier, but more lucrative assets.

Low interest rates in the developed world have also led to more money going to emerging economies, where debts are building. If interest rates were to rise, it would be harder for them to keep up their debt payments.

Another problem with the ultra-low interest rate policy – noted in the IMF’ s assessment of the general economic outlook – is that it leaves central banks with limited options to tackle a downturn.

Germany is widely seen as the obvious example of a country that could do this. The government has a budget surplus – it is spending less than it collects in taxes, and has done every year since 2012.

The country’s economy has been hit by the global trade tensions and it might well be in recession. The government is, however, reluctant to open the spending tap, partly perhaps because the unemployment rate is one of the lowest in the world.

In many other economies, however, the IMF says public debt and interest burdens are high and rising. These countries need to follow prudent policies, it adds.

If there is a severe downturn, though, the IMF says countries should be prepared for co-ordinated action.