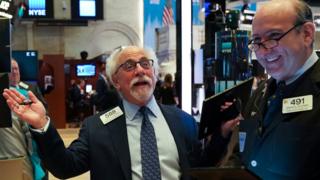 Some big European and Asian markets saw even larger rises in 2019, while the main US indexes were all on track to end sharply higher on the year.

It was a welcome return to form after 2018, in which many global markets suffered their worst year in a decade.

As the year ended, there were signs that the tit-for-tat trade battle between the US and China could be easing.

US President Donald Trump said he would sign a “very large and comprehensive” bilateral “Phase One” deal to avert a new round of tariffs on 15 January.

The Dow Jones added more than 20% during 2019, but the broader-based S&P 500 and the tech-focused Nasdaq did even better, both rising about 30%.

Hong Kong had a rough time economically in 2019 as months of anti-government protests took their toll, pushing the territory into recession.

That led to a few ups and downs in the performance of the Hang Seng index, but it still managed a 12% rise year-on-year.

The European economy had a mixed year, but was cheered in November by news that the eurozone’s biggest economy, Germany, had narrowly avoided recession. Frankfurt’s Dax index notched up gains of 25% during 2019.

And in the UK, Prime Minister Boris Johnson’s election victory earlier in December confirmed that the UK would leave the EU on 31 January.

However, worries persist that the timetable for negotiating a longer-term relationship by the end of 2020 may be too tight.

The FTSE 100 enjoyed its biggest annual gains since 2016, while the FTSE 250, seen as a better reflection of the UK economy, surged 25% for the year in its best performance since 2013.