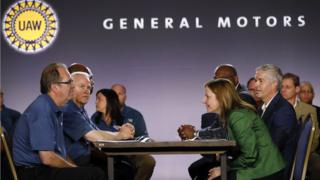 The United Auto Workers (UAW) union has announced a tentative deal with General Motors after weeks of negotiations and one of the longest strikes in the company’s history.

The four-year agreement, which would cover almost 50,000 workers, signals a possible end to the walkout, which has halted work at factories and cost the carmaker millions of dollars.

The deal remains subject to approval by UAW leaders and its members.

Details were not immediately available.

Union negotiators said the accord included “major gains” for members.

“The number one priority of the national negotiation team has been to secure a strong and fair contract that our members deserve,” said UAW Vice President Terry Dittes, director of the UAW GM department.

“Out of respect for our members, we will refrain from commenting on the details until the UAW GM leaders gather together and receive all details.”

Shares in General Motors rallied about 2% after the announcement. However, the UAW must vote to end the strike before staff return to work.

The strike started last month after the union’s previous four-year contract with GM expired. It is the first stoppage since 2007, when there was a two-day walkout.

The union has also been fighting to stop GM from closing car assembly plants in Ohio and Michigan, which the company has said were necessary in response to a slowdown in auto sales.