Goals Soccer puts itself up for sale amid fraud probe 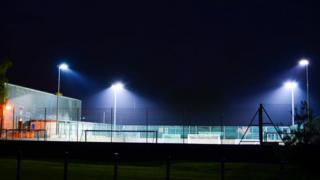 Five-a-side football pitch operator Goals Soccer Centres has put itself up for sale, as it continues to face the fallout from an accounting scandal.

The struggling company, which is part-owned by Sports Direct’s Mike Ashley, said it was now inviting bids for its business and assets.

Earlier this month, Goals said it had uncovered “improper behaviour” related to its accounts dating back to 2010.

Its former chief executive and finance chief are now under investigation.

Goals has stressed “no finalised conclusions have yet been reached”.

Mr Rogers has denied any knowledge of the allegations, while Mr Gow has yet to comment.

Goals, which operates 45 centres in the UK and four in Los Angeles, first realised something was wrong when it discovered widespread VAT errors in its accounts last March.

Its shares were suspended and the company hired accountancy firm BDO to investigate its accounts.

The firm, which employs 700 people, has said it will delist itself from the AIM stock market on 30 September because of the crisis.

Despite its troubles, its UK sales are up more 11% so far this year, with US revenues 15% higher.

Goals said there was “no certainty as to the timetable or outcome” of its sales process and it would update shareholders in due course.

Retail giant Sports Direct, which is owned by Mr Ashley, owns 19% of the East Kilbride-based company.