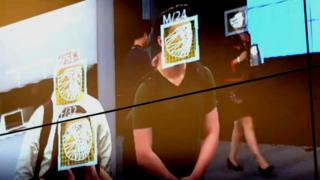 The US has blacklisted the company, alleging it is “implicated” in the repression of Muslim minorities.

Megvii, best known for its facial recognition algorithms, is reportedly seeking a valuation of up to $1bn.

In an emailed statement, Goldman Sachs said it was evaluating its role “in light of the recent developments”.

Goldman is a joint sponsor of the Megvii initial public offering, alongside Citigroup and JPMorgan Chase.

United Nations experts and activists say at least 1 million Uighurs have been detained in camps in Xinjiang. Beijing denies any mistreatment at the camps, which it says provide vocational training to help stamp out religious extremism and teach new work skills.

It has been reported that Megvii technology has helped police make thousands of arrests in China. However, the US document that blacklists the companies doesn’t detail its involvement in Xinjiang.

In June, Human Rights Watch withdrew a previous allegation that a smartphone app used to track ethnic Uighurs used Megvii’s technology. While the company’s code was found in the app, it was inoperable.

Megvii will be the first Chinese artificial intelligence firm to go public if its Hong Kong listing goes ahead. The Alibaba-backed tech company, which previously traded under the name Face++, is best known for its facial recognition technology.

Didi Chuxing’s ride-hailing app uses the technology to let passengers check the driver’s identity. The blacklist could have a significant impact, as it bars the companies from buying US technology without prior US government approval.

That could limit the access of China’s AI companies to US-made made microchips, upon which they’re currently heavily reliant.

Goldman’s decision to review its involvement in the IPO comes amid growing concern about the use of facial recognition software. A number of US states and cities have already banned government use of the technology, while several members of congress are pushing a bill look at the issue federally.

It’s also an issue in Hong Kong, where protestors engaged in the current unrest are using a combination of high and low tech methods to elude police surveillance.

The US move could also cast a pall over ministerial-level trade talks this week between the US and China.

The eight blacklisted Chinese companies are not the only ones to face the ire of the US government. Washington has previously imposed similar restrictions on other Chinese companies, notably smartphone maker Huawei, on national security grounds.