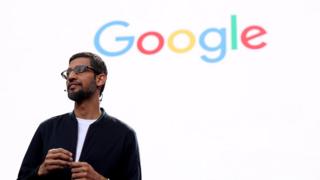 Google is expanding its financial offerings

Google has become the latest tech giant to announce a new financial product for users – this time, current accounts.

The firm said it plans to partner with banks and credit unions in the US to offer the “smart checking” accounts.

It said the service, to be launched via Google Pay, will allow users to add Google’s analytic tools to traditional banking products.

While the products and arrangements differ, the tech giants entering the world of banking share an underlying motive: making themselves indispensable, says Gerard du Toit, a partner at the Bain & Co consulting firm.

“They’re all competing for consumer attention and for their ecosystem and platform to win,” he says.

And both Google and Apple, which has teamed up with Goldman Sachs’ new consumer arm, Marcus, on a credit card as part of its Apple Pay and Wallet service, want to to make iPhones and Androids essential.

The moves into banking are likely to add to the debates over the tech giants, which are already facing probes related to competition, data protection and privacy.

Some officials have also expressed worry about gaps in financial oversight as growing activity occurs outside of traditional banking. And in recent days, New York announced it would investigate Apple, after accusations that its credit card relied on “sexist” algorithms.

“They will have to be very careful,” he said.

In many cases, the tech firms are working with traditional banks – a sign they are aware of the potential issues, he said.

Google said its US partners, which reportedly include Citigroup, would start to offer the accounts by 2020.

“We believe our partners’ regulatory and financial know-how is a great complement to our experience in building helpful tools and technology for our users,” it said in a statement.

Chinese tech giants have had success with financial services

Amazon has offered small business loans since 2011 and launched its credit card with JP Morgan Chase in 2017.

But in some ways, the flurry of announcements by companies this year, is a sign that the US is late to the party.

In China and some other countries, the tech firms moved quickly into banking, motivated by the need to fill the gaps left by traditional finance industry that created hurdles for their businesses, whether they were e-commerce firms or food delivery companies.

In the US, however, the need was less pressing, thanks in part to the ubiquity of credit cards and other “good enough solutions”, Mr du Toit said.

Big tech payment services provided by the likes of Alibaba’s Ant Financial and Tencent’s WeChat account for roughly 16% of China’s GDP, compared to less than 1% in the US, according to the Bank for International Settlements, an organisation backed by 60 of the world’s central banks.

Tech companies “are now increasingly getting into it because they do believe they can offer a materially better solution to customers,” he said.

“I view the financial infrastructure in the US as outdated,” he said.

As the tech companies start to make use of their massive reach, close customer relationships and giant data sets, banks “have woken up” to the threat, leading to collaborations and other uneasy “frenemy” arrangements, Mr du Toit said.

With tech firms moving beyond credit cards, regional banks will get left behind, while smaller financial technology firms are forced out or acquired, Mr du Toit said.

“I sometimes describe this as a giant Darwinian experiment of different couplings of the banks and the big techs,” he says. “There will be some mutations that succeed and others that fail.”

While Google’s earlier efforts to build up Google Pay failed to gain much traction in the US, the firm has developed significant payment business in India, where a Bain & Co survey found that more than half of respondents had used the platform in the last 12 months.

“I would not count them out,” Mr du Toit said.